Charley’s Is A Delicious Slice Of Philly In Davenport 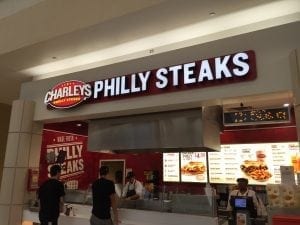 A philly cheesesteak sandwich seems deceptively simple to make but it’s much easier to botch than you would think. And believe it or not, Charley’s Philly Steaks – a MALL sandwich shop no less – is the real deal. And it’s freaking delicious.

A philly is, at its heart, thin slices of steak, onions, green peppers and a rich cheese (I’ve seen everything from the traditional provalone or Havarti to cheddar used) between a couple of toasted but fresh sub rolls. Sounds pretty easy, but more often than not, some element is off. The steak is overdone and too chewy, there’s too many onions, the bread is hard and not fresh enough or there’s some strange slathering of condiments or cheese that damages the real feel of a true philly. 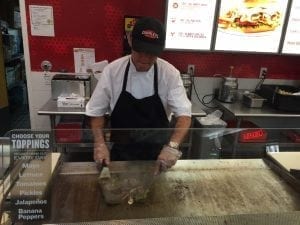 I’ve been to philly and had the authentic. I grew up around Chicago and had a bunch of contenders and pretenders. I’ve been all over the country and had various sandwiches of this ilk. And Charley’s gets it right.

A lot of that has to be due to the local franchise’s owner, Hugo Garcia, being on site. He was the guy making my sandwich, and he did a terrific job.

The philly I had at Charley’s was perfectly done. The steak was tender and succulent, flavorful and not tough at all. The onions and green peppers had a nice char and were likewise perfectly done – not too soggy, not too raw. The bread was a real star – fresh and flavorful and lightly toasted for that slightly crispy on the outside, soft on the inside perfection that rocks a philly.

Hugo uses the traditional provelone cheese, although you can mix it up. I went with the good old provelone, and it was primo. Good stuff. 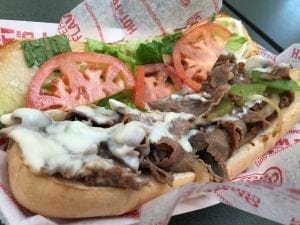 You can also add various condiments to the sandwich. I went with a very basic, minimal combo of fresh tomatoes and a little schmear of mayo and it was perfection. After all, if you’ve got that incredible combination of flavors in the grilled mix, you don’t want to overwhelm it with extras.

I love a great philly sandwich, and this is what Charley’s is. Seriously folks. Yup, in a mall. In NorthPark Mall in Davenport. If you’re over there shopping and have been thinking of giving it a try, but hesitated because you thought it was going to be just another disappointing, generic sandwich experience with tough steak, stale bread and soggy condiments, you’re going to be in for a pleasant surprise if you give them a try. It’s none of that. It’s an awesome philly. I highly recommend it.

For more info, a menu and other mouth-watering pics, see www.charleys.com.

Sean Leary
Sean Leary is an author, director, artist, musician, producer and entrepreneur who has been writing professionally since debuting at age 11 in the pages of the Comics Buyers Guide. An honors graduate of the University of Southern California masters program, he has written over 50 books including the best-sellers The Arimathean, Every Number is Lucky to Someone and We Are All Characters.
See More Articles From Sean Leary
Advertisement
Tagged: Charley’s Philly SteaksDavenportfoodfood featureHugo GarciaNorthPark Mall