Moline, IL – A collaborative research paper about Quad Cities bicycle trails by one Western Illinois University graduate student and one alumna, along with their professor, has been projected to “make a major contribution to the field,” with its findings related to diversity among those who use the trails.

Recreation, Park and Tourism Administration (RPTA) graduate student Sadie Parker, of Redlands, CA, and RPTA alumna Haily Hinson, of Hohenwald, TN, are in the process of making edits to their paper, “Spatial Accessibility of Bicycle Routes in the Quad Cities: Impacts for Environmental Justice.” The two authors wrote the paper as part of their graduate studies with RPTA Professor Rob Porter and hope to have it published in an academic journal. 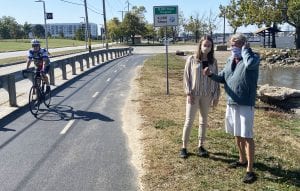 the Quad Cities metropolitan boundaries. The research ultimately showed a diverse population benefits from close access to the Quad Cities’ bicycle trails; a result different from what previous research in other areas of the country has suggested.

The initial idea for the project came from Porter, a frequent user of the trails.

“I have lived here nearly five years and I use the trail in front of the Quad Cities campus every day on my way to work,” said Porter. “Conceptually, I’ve looked at spaces all over the country, but this one was much closer to home.”

The students did research on the various trails in the metro area, specifically looking at who has direct access to use the trails and who does not.

Parker and Hinson were also roommates and lived near WIU’s Quad Cities campus during the study.

“Sadie used the trail to get to school,” said Hinson. “We saw the trail every day for the last two years and decided to do a more statistical analysis.”

The research also used sociodemographic data, available from the U.S. Census Bureau and bike trail data, provided by the Bi-State Regional Commission in the Quad Cities.

“We started with a literature review, reading other papers that involved environmental justice, bike trails and accessibility issues,” said Parker. “Concurrently, we reached out to bicycle trail organizations in the Quad Cities for bikeway network GIS data.”

“We wanted to analyze and see if there were differences in demographics and socio-economic status between the people who have close access, and those that don’t,” said Parker. “We found that those who benefitted from close access were populations of lower income, minority, college educated and short-term residents. This is not what we saw in our literature review, which was that there was often more access for the higher income, White population.”

Porter said the research is especially vital because of its focus on diversity in trail usage.

“This is important research because I have never seen someone get this kind of comments on their work,” said Porter. “This really adds to the field of environmental justice research and the cities should be really proud of these results. Sadie and Haily did a lot to tweak the data, which allowed them to pull all of this together in a semester and do such high quality work, which included Ph.D.-level writing. There is diversity on the trails, we just never noticed it.”

Both women were recruited to WIU’s RPTA program by Porter. Parker said she loved the range of courses the program of study included, which tie in to what she wants to do in her future career.

Hinson said she chose WIU because of its discussion-based courses, which allowed her to learn from the opinions of others.

“This is something I really needed for my future work,” she said.

Parker is currently an intern for the United States Army Corps of Engineers Field Station in Muscatine, IA, and will graduate in December. She hopes to become a natural resource specialist who creates programs to bring diversity into the field.

Hinson is currently an apprentice for the United States Department of Agriculture’s Forest Service near the state lines of Kentucky and Tennessee; specifically at the Land Between the Lakes National Recreation Area. She hopes to become a wildlife educator or park ranger to show future generations the importance of how to care for natural resources.