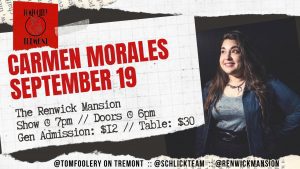 General Admission: $12 // Table of 2: $30
Carmen Morales has a captivating style which incorporates opinionated quick wit and outlandish characters. Taking from family, friends and people from everyday encounters she transforms into these characters seamlessly, then adds hilarious commentary which leaves the audience doubled over in laughter. With a perfect combination of like-ability and vulnerability she has been well received by audiences internationally. She’s been seen on two seasons of the tv show “Laughs” on Fox and heard on Sirius XM radio in the U.S. and Canada. She’s also been featured in Gilda’s LaughFest Comedy Festival, the World Series of Comedy, Scruffy City Comedy Festival, Women of Comedy Festival, in the New York Times and has produced her own traveling comedy show, The ‘Not Your Average Broads of Comedy’ as well as performed in comedy clubs, colleges, strip malls, indie shows, dive bars, towns no one has ever heard of and military bases across the country.
Tomfoolery On Tremont // CARMEN MORALES: Fox, Sirius XM, World Series of Comedy, NY Times has produced her own traveling comedy show, etc.
TIX, Gen Admission: https://www.eventbrite.com/…/tomfoolery-on-tremont…
TIX, Table: https://www.eventbrite.com/…/tomfoolery-on-tremont..

Sean Leary
Sean Leary is an author, director, artist, musician, producer and entrepreneur who has been writing professionally since debuting at age 11 in the pages of the Comics Buyers Guide. An honors graduate of the University of Southern California masters program, he has written over 50 books including the best-sellers The Arimathean, Every Number is Lucky to Someone and We Are All Characters.
See More Articles From Sean Leary
Advertisement
Tagged: carmen moralesQuad-Cities comedy sceneTomfoolery on Tremont