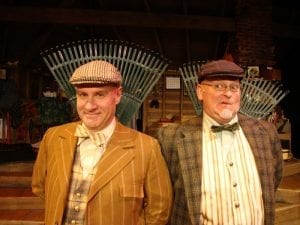 A Year With Frog and Toad, the latest children’s production at Circa ’21, is wonderfully done, a show which perfectly captures the tone, feel and look of one of America’s most popular children’s-story series.

The terrific, literate show, which was nominated for three 2003 Tony Awards including Best Musical, is masterfully done, and I, as an adult watching it, truly enjoyed it. I think adults watching it will likewise appreciate its subtle, well-crafted style, and smaller children will particularly like it, especially if they are fans of the book.

It is a bit slow-moving, and pre-teens and older elementary school kids may find it a bit plodding. It also lacks the broad humor that tends to be inherent in most Circa kids’ shows (i.e. no poop and butt jokes), but personally, I found it delightful.

The story is pretty much summed up in the title and its bio: “Waking from hibernation in the spring, Frog and Toad plant gardens, swim, rake leaves, go sledding, and learn life lessons along the way. Along with pals that include birds, moles, squirrels, and an especially slow snail, the two best friends celebrate and rejoice in the differences that make them unique and special.”

Stars Jon Horvath and Brad Hauskins, regulars on the Circa kids stage, are terrific in the lead roles, and director Kim Kurtenbach shows a deft touch in all aspects of the production – choreography, costuming, sets, it all makes for a beautiful production that I highly recommend for parents and small children alike.