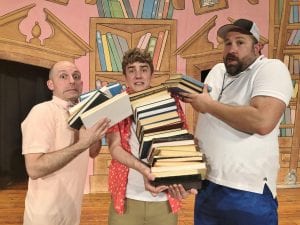 In its first complete mainstage production in a whole year, the Spotlight Theatre, 1800 7th Ave., Moline, will perform the madcap “Complete Works of William Shakespeare (abridged)” on March 19 to March 28.

“This abridged cast of Jeremy Mahr, Amelia Fischer, and Brent Tubbs are sure to give the 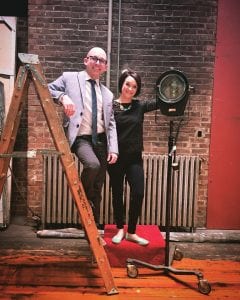 The Spotlight is run by the married couple Brent and Sara Tubbs.

audiences a much needed laugh,” the Spotlight posted on its Facebook page, noting its first full production was from the Reduced Shakespeare Company “abridged” repertoire in 2018, so “we thought this would be the perfect show to bring us back.”

The rapid-fire Shakespeare riffs on all 37 of the Bard’s plays in 90 minutes. “Hilarity will ensue, props and costumes will fly, and sides will be split from laughter,” the Spotlight promises.

Tickets ($20) will be available soon, but limited to 50 people per performance, to follow state of Illinois Covid-19 guidelines. Masks will be required and social distancing followed.

The Spotlight’s inaugural production was June 2018, “All The Great Books (abridged),” one of the many “abridged” productions created by Reduced Shakespeare Company, with which Brent Tubbs has performed worldwide. 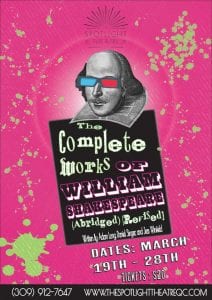 The Spotlight will open “The Complete Works of William Shakespeare (abridged)” next month. 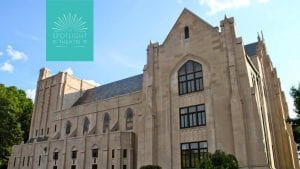 The Spotlight Theatre and Event Center is at 1800 7th Ave., Moline.

At Spotlight, he performed the romp with fellow (then) ComedySportz actor Jeremy Mahr, and St. Ambrose grad Jackson Green. Brent and his wife Sara Tubbs co-own the Spotlight (in the former Scottish Rite Cathedral).

Tubbs toured with RSC’s “All the Great Books” around the world from 2005 to 2011 and performed with Mahr in the company’s “The Bible: The Complete Word of God (abridged)” in 2016 at QC Theatre Workshop, Davenport.

An irreverent, fast-paced romp through the Bard’s plays, “The Complete Plays of William Shakespeare (abridged)” was London’s longest-running comedy – having clocked nine years in the West End at the Criterion Theatre. The RSC (itself a play on the Royal Shakespeare Company) is a three-man American comedy troupe that takes serious subjects and reduces them to short, sharp and accessible comedies.

Amelia Fischer co-starred in the Spotlight’s last mainstage production, the musical “The Wedding Singer,” which closed Feb. 23, 2020. The theater had to shelve the remainder of its planned 2020 season, hosted 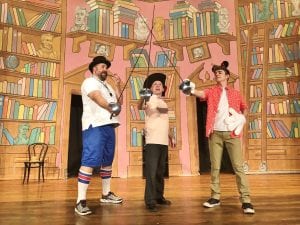 The Spotlight’s first production was “All the Great Books (abridged),” with Jeremy Mahr, left, Brent Tubbs and Jackson Green.

occasional small cabarets, movies, posted online interviews with theater and TV pros, and has run its children’s theater company in the interim.

The Spotlight launched a jazz lounge series last fall (with pianist Mason Moss and singer Sara Tubbs), which will be back (on a monthly basis) in the new Blueprint Bar and Lounge in the building, starting Feb. 20. For more information, visit thespotlighttheatreqc.com.