Spotlight Theatre Partners With Other Venues on New Video

Many of us feel powerless during the relentless, unending onslaught of Covid-19, but Brent Tubbs is not taking it laying down.

The co-owner of Moline’s Spotlight Theatre (with his wife Sara), Tubbs recently filmed and edited a special music video highlighting several Quad-Cities theaters – including his – that have been shuttered again due to the pandemic. 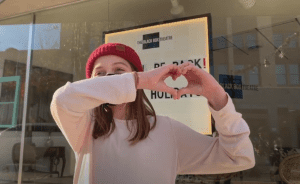 A scene in the video from Black Box Theatre, Moline.

Available at thespotlighttheatreqc.com, the three-minute video – set to the inspiring “From Now On” from “The Greatest Showman” — features many masked performers dancing outside local theaters. It is meant to be shared with the hashtag “#savetheartsqc.”

“This pandemic has been devastating and a challenge for so many,” the Spotlight (1800 7th Ave., Moline) posted Monday on Facebook with the video. “The Quad Cities rich theatre arts venues have been severely impacted. As a theatre community, we ask you to remember us this holiday season, because we are still here, and will still be here for you when we can come together again and celebrate all of the joys of live theatre and storytelling.”

Tubbs – who opened the Spotlight with his wife in 2018 – said he saw a similar video from London’s West End, and wanted to raise awareness about the continuing struggle of area theaters, completely shut down in Illinois since Nov. 20.

“I wanted to have a unifying video, to say ‘Look, we’re still here, we are struggling,’ ” he said. “Keep us in mind this holiday season, whatever that means for each person, each theater — whether donating, buying a gift certificate, signing up for a class. I wanted it to be an overarching 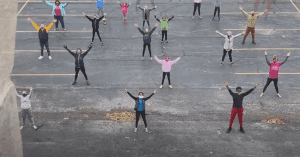 Choreographed by Steph DeLacy, the video is comprised entirely of dances and no performer utters a word. The Spotlight encourages people to share it on social media with the hashtag #savetheartsqc.

“Obviously being in musical theater, we know how more powerful music can be,” Tubbs said. “We wanted to let the video speak for itself, showing the empty theaters, showing empty parking lots. We wanted it to be very visual, as opposed to just wordy.”

The theaters featured in the video are the Spotlight, Black Box Theatre, Playcrafters and Quad City Music Guild in Moline, Circa ’21 and Center for Living Arts in Rock Island, and Davenport Junior Theatre. The video notes this is just a portion of all the live theaters in the Quad-Cities.

Previous Illinois restrictions permitting a maximum of 50 patrons for indoor live theater allowed for the Black Box, Spotlight and Circa to host small shows this year. 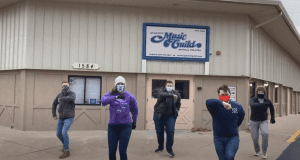 A scene in the video from Music Guild, Moline.

The Village Theatre in the Village of East Davenport has been closed since the spring, and Davenport Junior Theatre recently presented its mainstage production virtually. 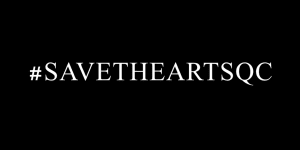 do takeout, but theaters just have not had that option. In this last round, theaters must close.”

The Spotlight has not had a mainstage production since last February’s “The Wedding Singer,” and has had limited cabarets and other events since then.

To raise some additional revenue, the Spotlight has a video available of the Disney cabaret it held in September. It can be rented (for $8 per single view) through Dec. 4, and there also are gift certificates and merchandise for sale on the theater website. The new Stolen Set Improv (which Tubbs is part of) also has its first show from February online, free to watch.

Spotlight offered an outdoor “Alice in Wonderland” pop-up show (for a fee) that traveled to various locations in the area upon request. That was performed about 15 times, through the end of October, Tubbs said. 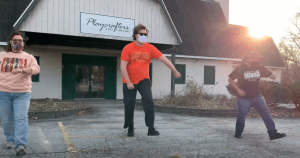 A scene in the video at Playcrafters, Moline.

Circa – which is closed for the holiday season for the first time since its 1977 opening – is offering a special holiday gift certificate. Through Nov. 30, you can get a certificate for a 2021 dinner and show for two guests, for $85, at www.circa21.com.

Playcrafters and the Village Theatre are doing online fundraising campaigns through GoFundMe.

With Thanksgiving this Thursday, there’s not much for theater owners to be thankful for.

“We’ve tried to stay as positive as we can through all this,” Brent Tubbs said. “Hopefully, with the vaccines they keep talking about, it’s like a light at the end of the tunnel. But there’s the sheer comfort level of people going back out once things are able to open. We can get to the point where you can open, but that doesn’t mean people are going to come out. It will be a long treacherous road coming back, We’re willing to tough it out.”