REVIEW: Thrilling, Energetic “Newsies” at Countryside Worthy of a Pulitzer in Performance

It’s hard to go wrong with “Disney’s Newsies: The Musical.” But that doesn’t mean at all that it’s easy to get right.

The glorious, massive show – given an expert, exhilarating production by Countryside Community Theatre – is a classic “underdog vs.

A big dance scene at the “Newsies” start of the second act.

topdog” battle. Scrappy, poor, relentlessly tenacious newspaper carriers (the newsies) go on strike after the cold, conniving, egomaniacal publishing titan Joseph Pulitzer hikes the cost they must pay to sell copies – in a bid to boost his bottom line.

In the pre-broadcasting days, circa 1899, newspapers were THE king of communication and New York City alone had 15 daily papers at the dawn of the 20th century, engaged in ruthless wars for sales and dominance. What makes the “Newsies” musical (based on a true story and the 1992 Disney film starring a young Christian Bale) so appealing is the purity of good versus evil, cheering for the upstart, young newsies – led by the charismatic “17-year-old” Jack Kelly, rooting also for the feminist moxie of ambitious reporter Katherine Plumber, and roaring to an inspiring happy ending after a plethora of 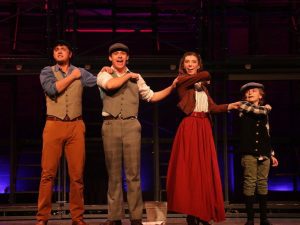 Easier said than done, for sure.

To Countryside’s credit, the 39-year-old community nonprofit has assembled a first-class team of talents on and off stage to bring the thrilling 2012 musical to ecstatic life. This is arguably the most committed, energetic and full-throated show I’ve seen in the past two months – since I’ve finally been attending theater in-person regularly. It’s as if the 33-member CCT cast is performing their last production before another extended shutdown; they’re clearly giving it more than the cliched 110 percent. They MEAN it, want to make it count, and it shows, 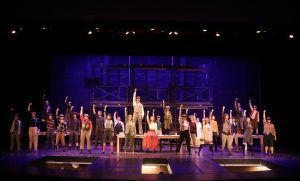 The ending of “King of New York” in Countryside’s “Newsies,” directed and choreographed by Ashley Mills Becher.

Under the tremendously assured, stylish direction and choreography of Ashley Mills Becher, this is a “Newsies” to celebrate, starting with the confident Andrew Arevalo (a University of Wisconsin-Platteville junior) raising the roof as Jack.

At the story’s start, Arevalo winningly sings of his dreams of beginning a new life out West in Santa Fe, and that classic “I want” song is reprised to breathtaking effect in a stunning Act I close, after the enthusiastic, uplifting group anthem, “Seize the Day.”

One of Becher’s most inspired casting choices is to have the traditional male role of Jack’s best friend, Crutchie (kind of “Newsies” Tiny Tim), played by a lively, spunky girl, 14-year-old Marley Haley. The character is all the more special for the Moliner since in real life, she lives with Complex Regional Pain Syndrome (CRPS), forcing Marley to sometimes use crutches, and she is just great in “Newsies.”

Female drive, pluck and perseverance are personified in Sophia Kilburg, who’s a perfect Katherine Plumber – the pioneering New York Sun reporter (who turns out to be the daughter of the villainous Pulitzer, who owns the rival New York World). At first, she writes for the society 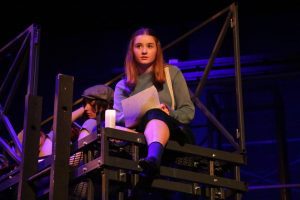 pages, but knows a big story when she sees Jack’s plans and she gets them (a true David taking on Goliath) on the Sun front page.

The combination of “The World Will Know” (a terrific title with double meaning) – which shows the passion and purpose of the newsies to form a union and protest – and Katherine’s “Watch What Happens” right after – outlining her ambition to be taken more seriously as a journalist, giving voice to the newsies’ dreams – is genuinely stirring and electrifying.

Kilburg (a 20-year-old University of Iowa student) and Arevalo also have a spiky, intoxicating Hepburn-and-Tracy vibe going on, the clash of two stubborn equals, at first annoying the hell out of each other, but of course later falling in love. 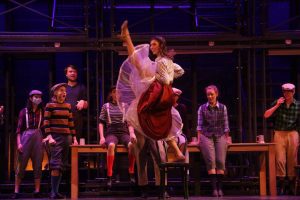 The rest of the Countryside cast is uniformly stellar. Q-C theater veterans Chris Tracy and Rochelle Schrader make the most of their colorful roles, as Pulitzer and vaudeville theater owner Medda Larkin, respectively. The wealthy, uncaring publishing baron is naturally the more meaty role and Tracy attacks it with relish and gusto.

His first act “The Bottom Line” sets out his devilish plan to raise prices on the newsies, to boost his paper’s declining circulation, and Tracy reprises it to devastating effect in the second act. His chilling Pulitzer knows he’s behaving badly, but baldly admits that he simply doesn’t care (in real life, he would redeem himself).

Schrader – who is at home in operatic and musical theater roles – is delightful as Jack’s friend Medda, and lightens the often tense mood of the show with her theater scenes, including a long 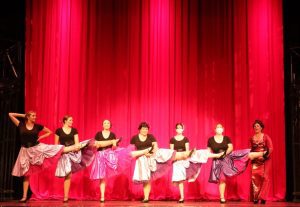 red curtain and Jack’s painted backdrops that reveal a deep artistic talent explored in the story. The cheery, boisterous “That’s Rich” by Medda and her Bowery beauties is a first-act highlight.

Two of the key secondary newsies – Davey and Les — are played with fervor and spirit by Nickie Callender and Ben Bergthold, respectively. Ben, a 10-year-old local theater veteran, is especially cute and sprightly. His playful, precocious Les is already a cynical little con man, at one point pulling the wool over a lady’s eyes to sell a pape. According to the program, Ben already has been signed to talent agencies in Chicago and L.A., and has been in several short films and commercials.

Callender as Davey is the wise, informed assistant to the idealistic, swaggering Jack, making sure the carriers achieve their union goals. In “Seize the Day,” the Moline High grad (who starts Drake in the fall) sounded a bit tentative and nervous, but makes a solid partner with Arevalo as the song builds. As a metaphor for the “Newsies” story, the two men sing stronger together, and they’re a powerful force when they band together.

“We stand as one,” the newsies triumphantly sing, and their extended dance break in the instrumental of this iconic song is a big, brilliant tour de force of the ensemble. Their dedication, energy and enthusiasm are a wonder to behold.

That extends to the rest of this impressive, yearning show – Becher handles this huge group with exquisite care and purpose, and their

movements are decisive and sensational. The two-level set pieces (on wheels) are moved around with great variety and effectiveness, and the set, lighting, costumes, and orchestra all blend in a seamless whole. The irresistible, infectious “King of New York” is another outstanding group highlight of the show.

Near the end, as Pulitzer and Jack work out their differences in a calm, thoughtful compromise (what a concept!!!), many of the cast are spread throughout the audience, which really helps us be invested in the story. Eric Teeter – who plays several roles here – makes brief, crucial appearances as New York Gov. Teddy Roosevelt, who just two years later became U.S. president, and rightfully calls out Pulitzer as a bully.

As you may know, Pulitzer forever redeemed his reputation by donating $2 million to New York’s Columbia University to start a journalism school, which opened in 1912 – a year after his death. The university created the Pulitzer Prizes (the most prestigious award in journalism) in his honor, beginning in 1917, and later expanded to include literature, poetry, history, music and drama.

Start spreading the good news — “Newsies” will be performed again next weekend, Aug. 6-8, at North Scott High School, 200 S. First St., Eldridge. Tickets for Countryside are $15 each, and are available at https://ccteldridge.booktix.com/. For more information, visit www.facebook.com/CCTQuadCities/.