Thursday in Birmingham the Storm beat the Bulls 5-2 in the two team’s first matchup of the season.  The Bulls struck first in period two to take the first lead of the game.  Quad City answered with three straight scores by Taylor Pryce, Shane Bennett and Pryce’s second of the night.  Kasey Kulczycki got the Bulls back within one before Filip Virgilli scored for the Storm and made it 4-2.  Nick Mangone added an empty net goal to set the final score at 5-2. 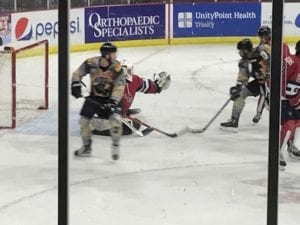 The following night in Pensacola the Storm battled for an overtime victory in a back-and-forth contest.  Michael Moran and Tommy Stang notched the first two scores of the game to make it 2-0 Quad City.  Pensacola got on the board late in the first period to make it 2-1 and then scored at 8:53 of the third period to tie the game.  Tommy Stang recorded his second goal of the night to put the Storm back on top, but Pensacola answered again with just over two and a half minutes left in regulation to send the game to overtime.  In the extra session the Storm was awarded a power play when a Pensacola player failed to exit the ice after losing his helmet.  Michael Moran scored with the extra attacker to give the Storm its 11th straight win.

Sadly, overtime was not as friendly to the Storm on Saturday for the third and final game of the road trip.  After falling behind 2-0 the Storm rallied to tie and send the game to sudden death overtime.  Pensacola found the winning score to earn the extra point and stop the Storm’s winning streak at ten games.  The Storm has now recorded points in 12 straight games.

Hockey returns to the TaxSlayer Center this weekend as the Storm begin an eight-game holiday homestand.  Black Friday November 26th is presented by Sweet Tooth Snacks.  The Peoria Rivermen will lineup opposite the Storm Friday night and the first 1000 fans in the building get a vuvuzela horn.   Saturday is dollar beer night when the Storm take on the Vermillion County Bobcats.

The schedule for the remainder of the Holiday Homestand is as follows:

December 3rd-Nothin’ But Hockey vs. Peoria

Sean Leary
Sean Leary is an author, director, artist, musician, producer and entrepreneur who has been writing professionally since debuting at age 11 in the pages of the Comics Buyers Guide. An honors graduate of the University of Southern California masters program, he has written over 50 books including the best-sellers The Arimathean, Every Number is Lucky to Someone and We Are All Characters.
See More Articles From Sean Leary
Advertisement
Tagged: Quad City StormTaxSlayer Center