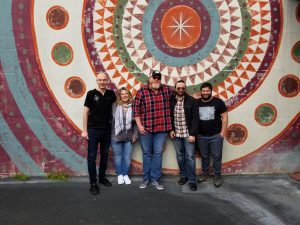 If you’re from the Quad Cities you’ve probably heard that jingle a million times. The artist behind one of the catchiest tunes around town is Bob Holtan. You may know him as the father of Jeni Grouws, lead singer of the Avey Grouws Band, who is following her father’s footsteps but carving her own path. Jeni sings the blues with a powerful voice that sticks in your head just like the Menards jingle.

The Avey Grouws band consists of members Jeni Grouws, Chris Avey, Bryan West, and Randy Leasman, with the addition of Nick Vasquez on the keys when possible. The group banded together after a jam session on the Iowa side of the Quad Cities, and since then have put their Quad Cities blues out into the musical airwaves. Their debut album ‘The Devil May Care’ was released in March of 2020, on the cusp of the pandemic.

“We had our album release party scheduled for March 20, 2020, in the QC. After a lot of discussions, we decided to cancel the in-person show a few days before,” Grouws said.

A little luck and quick thinking gave the band an incredible opportunity to bring a sense of community in the midst of a not-so-connected time. The band transitioned their album release party to a virtual setting and completely changed their trajectory for the next year.

To read the rest of this article on The Echo, click here!