Matt Walsh and Kayla Jo Pulliam are pioneers in this brave new world of indoor Q-C theater, presenting the first full-length play locally since coronavirus shut life down in March.

Walsh, a 43-year-old who works in insurance, and Pulliam, a 30-year-old preschool teacher, both have a passion for theater, and will present a two-person adaptation of the spooky “Turn of the Screw” Thursday through Sunday at Moline’s Black Box Theatre, 1623 5th Ave.

Lora Adams, Black Box co-founder, directs the duo and did the set design and costuming. The theater is abiding by Illinois phase 4 restrictions – allowing only 50-percent capacity for the 60-seat venue; patrons must wear a mask to enter, will have their temperature taken, and only certain seats will be available to conform to social-distancing guidelines.

Patrons can remove their mask during the show once they are seated, hand sanitizer will be available, and every seat is disinfected before each show. Even Walsh and Pulliam will wear clear face shields while performing. 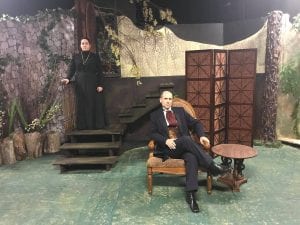 “I was worried it would hinder our performance; it really doesn’t,” Pulliam said Tuesday. “It’s allowed us to interact with each other; it kind of takes away that fear from us.”

“It’s definitely an interesting experience,” she said. “We’re dipping our toes in the water. It’s definitely been the most unique theater experience I’ve had. I’m excited. Everything we’re doing is really safe.”

Adams has “really been on top of this, taking this very seriously, to sanitize everything in the theater, temperature checking everybody,” Walsh said. “We want to get back to theater, but to do it safely.”

“We started with cloth masks and found that was restrictive, and moved to the face shield, which helps us show more facial expression,” he said. “The sound is different when you do that; they can fog up. There are lot of challenges there.”

“We do have contact with each other at portions during the show, but I don’t feel I’m at risk,” Walsh said. “I feel pretty safe; it’s nice being a two-person show. You don’t have a ton of people. I’m just a theater goof, so when Lora said, ‘How would you like to do a two-person play and you’d be able to play multiple parts?’ That sounds cool. I’m up for a lot of different things.”

Pulliam has just been in the Q-C a year, moving from Bloomington-Normal with her fiancé, to be closer to her stepdaughter. She’s a preschool teacher with the Rock Island-Milan district and majored in theater at William Woods University, Fulton, Mo.

“I absolutely love the opportunity to explore a character, explore circumstances unlike I have ever experienced,” Pulliam said. “I put myself in a character, figure out how to act. How would you feel in the moment? It’s definitely cathartic. Losing myself in a show is the biggest relief I can have. You can be in a different world for an hour and a half, where there isn’t a pandemic going on.

“You worry about things these characters are dealing with, not think about Covid, being nervous going back in the fall, how are the students going to be?” she said. 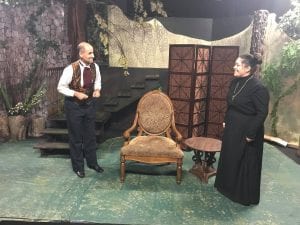 Walsh, a former theater teacher at Rock Island High School, now works for Progressive Insurance. He and his wife moved back to the area in 2009 after living in Montana while she went to grad school. He took a long hiatus from theater, to help raise his two kids, and this is his fifth show since returning the stage in 2018. That year, Walsh was part of Black Box’s “War of the Worlds” radio play, and has done many outdoor plays at Genesius Guild in Rock Island, including last year’s “The Tempest.”

“I have great love for Shakespeare,” he said, noting his favorite past roles include Hamlet, Macbeth, Oedipus and his many off-stage roles as a director, stage manager and sound designer for other Q-C productions.

For “Turn of the Screw,” based on the Henry James novella, Walsh plays four different roles, all without costume changes.

Based on the provocative tale of suspense, horror and repressed sexuality, this 1996 Jeffrey Hatcher adaptation gives the famous story yet another turn. A young governess journeys to a lonely English manor house to care for two recently orphaned children. But she is not their first governess.

Her predecessor, Miss Jessel, drowned herself when she became pregnant by the sadistic valet, Peter Quint, who was himself found dead soon after under mysterious circumstances, according to a synopsis. Now the new governess has begun to see the specters of Quint and Jessel haunting the children, and she must find a way to stop the fiends before it is too late. But one frightening question tortures the would-be heroine: Are the ghosts real, or are they the product of her own fevered imagination?

Walsh portrays the uncle of the two orphans, and also plays the housekeeper, the narrator, and one of the children.

“The characters are done 100 percent with his body language,” Pulliam said. “Who is on stage based on how the Governess is reacting. Is it happening in her head or real life? Is this real, or is she making that up?”

“From the very first read-through, the characters were so distinct, the physicality,” she said of Walsh. “It’s going to be really cool for the audience to see him transform.”

“It’s always interesting doing a two-person show, always challenging for the actors,” Pulliam said. “This show is a little spooky. I’ve always been interested in the paranormal, thrillers, mystery films and horror films.”

In “War of the Worlds,” Walsh was able to play different characters by changing his voice. Now, he does the different roles not only doing different voices, but physically changing the way he portrays characters, he said.

“It’s a lot of fun, challenging, the chance to prove myself,” he said. “It’s interesting, the way it’s written, very creative.”

“I like to be somebody else, at least for little while,” Walsh said of theater. “I love to tell stories, read stories, and this is great way to tell a story.”

Hatcher follows the book’s lead in never actually presenting the ghosts. “Like James, he leaves it to the audience to decide whether the ectoplasmic visitors actually exist or whether they are the creations of the governess’s overheated imagination,” according to a 2017 New York Times review.

“Initially charmed by her charges, the Governess begins to suspect that these ‘innocents’ have been schooled in vice by a sinister valet, Peter Quint, and the former governess, Miss Jessel, both now dead — but not quite gone, or so it seems” said a 2016 Los Angeles Times review.

The 20-year-old governess has been “very sheltered her whole life,” Pulliam said. “She’s got a light in her, she’s very excited about this new opportunity. She’s a pastor’s daughter, this is her first experience outside her father’s home.”

In the play, we watch her “go from being nervous and excited, see her get scared, headstrong, and into madness, and an evangelical fervor she has,” the actress said. “She becomes so obsessed with saving these children from what she believes is happening to them, she holds on to what she’s raised with.”

Pulliam enjoys strong characters — among her favorites she’s played was the classic Blanche DuBois in “Streetcar Named Desire” at a theater in Bloomington, Ill.

She and Walsh were a month into rehearsals for “Screw” when they were shut down in mid-March, and they never knew if it’d be re-scheduled. They kept up reading lines on Messenger video chat, and eventually cast their scripts aside until Adams let them know phase 4 in late June allowed theaters to reopen. They returned to live rehearsals the first week of July.

“It was disheartening, so many things canceled,” Walsh said. “I never dreamed we’d be able to do this as soon as we have, which I’m excited about.

Tickets are $13 on Thursday and $16 for the remaining performances – 7:30 p.m. Thursday to Saturday, and 2 p.m. Sunday. Advance purchase of tickets is highly recommended in order to avoid handling money. More information can be found at theblackboxtheatre.com.