Corey Kendrick is rootless no longer, and has returned full circle.

An affable, down-to-earth jazz pianist, composer and recording artist, Kendrick is back in the Quad-Cities from Detroit and will be teaching 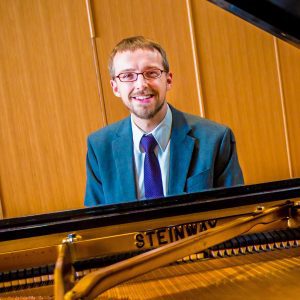 Kendrick earned his master’s in jazz studies at Michigan State University, and was a part-time BHC instructor during 2012-13.

“I love the music program at Black Hawk. It’s not a cut-throat program. It’s a very friendly, supportive community,” he said recently. “The students are there to help each other fulfill their goals of becoming better musicians, and it’s so inspiring to be able to be a part of that community,” he said.

A 36-year-old North Scott High School graduate, Kendrick grew up in Park View, Iowa, less than 30 minutes from the Quad-Cities Campus. He earned a Bachelor of Liberal Studies from Southern Illinois University Edwardsville in 2008 and a Master of Music in Jazz Studies from Michigan State University in 2015.

Before moving to Michigan to pursue his master’s degree, Kendrick spent the 2012-13 school year as a part-time BHC instructor. He coordinated the 2013 BHC Jazz Festival and taught in the 2013 BHC Summer Jazz Camp for high school, college and community musicians.

Kendrick recorded his first album, “Rootless” (2016), in Ann Arbor, Mich., consisting mostly of original compositions. He performed it with a drummer and bass player he knew from Michigan State, and they went on a tour of a few Midwestern states. 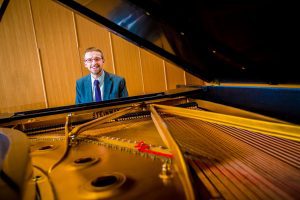 A Jazz Times review of his debut record said: “Corey Kendrick is a brilliant young pianist and composer…His sense of harmony and melody is something innovative with not only a little adventurousness and – dare I say – bravado…The Corey Kendrick Trio have given us a debut album that stands among the finest albums of the year…There is energy and passion, warmth and affection, and loads of intellectual and emotional satisfaction. It is old jazz done in a new way. I love it.”

A review at Bebop Spoken Here said Kendrick had the touch “common to all of the great jazz pianists. The ability to take a tune on a trip to Mars whilst holding the attention of those still Earthbound. 5 stars.”

Kendrick has recorded a second album, also in Ann Arbor, but with Covid, its release and tour was delayed, until most likely summer of 2022.

While in Michigan, he taught at the MSU Community Music School in Detroit, at the MSU Big Band Symposium and at high school jazz workshops while maintaining a private music studio. In 2018, he returned to the Quad-Cities for a five-day visiting artist residency through Quad City Arts and performed educational outreach concerts for more than 1,500 K-12 students.

Kendrick said he basically lucked into that residency. Nate Lawrence, who runs the Polyrhythms Third Sunday Jazz Series (for which the pianist has played), had booked him at the Redstone Room and a Quad City Arts board member saw Kendrick, and encouraged him to become a Visiting Artist. 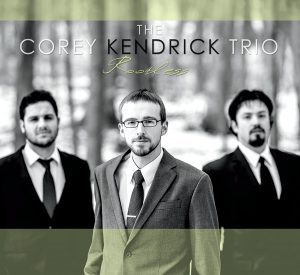 “That was such a thrilling experience; it was a whirlwind of a week,” he recalled, doing about a dozen performances and workshops over five days. “It was a whirlwind, but it was very cool. A lot of elementary and middle-school performances in big gymnasiums, full of excited school kids. It was great to be able to bring the music to a young generation and get to tell them where this music came from and what it’s about.

“I love jazz, but it’s something that a lot of young people don’t get to hear unless they seek it out,” Kendrick said. “So I think it’s so great that Quad City Arts is doing these programs to get the arts into schools, so that their young kids are getting the chance to be exposed to this music and hear some things other than what’s on the radio or TV.”

Three years later, Kendrick is back in the Q-C permanently and replacing longtime BHC music professor Dr. Edgar Crockett, who retired this year.

“Edgar would have the jazz students at Black Hawk play gigs and they’d open up for jam sessions at the former Fireworks coffee house in Moline.” One summer, Kendrick took part in the Quad City Arts’ Metro Arts jazz program, and Crockett directed that. After his undergrad

degree, he worked in the Quad-Cities, and Crockett asked him to direct the BHC jazz band for a year in 2012-13.

“And that was some of my first teaching experience, and it was a blast,” Kendrick said. “So I keep coming back to Black Hawk, and I’ve done it for many years and we played together in the early 2010s. When I was back in the Quad-Cities, we would play gigs together too. So I’ve known him both kind of as a mentor, as a player, but also as a teacher.” He’s honored and excited to actually replace Crockett in the BHC position, including organizing the next jazz festival.

“It’s a huge responsibility. Edgar is in an institution in the Quad-City music scene and he’s really kind of helped keep jazz alive in the Quad-Cities.” “There’s a big community around Bix’s music, and early 1920s, ‘30s, ‘40s jazz. I think it was a little bit of a gap — not a whole lot of people who were into kind of bebop and Blue Note, and the kind of 1950s, ‘60s, ‘70s sort of stuff, and Edgar is way into that. And I think as a result, I’m heavily into bebop music. “Something about it has always kind of resonated with me,” Kendrick said. “And I think a lot of that goes back to working with and studying with Edgar. It’s an honor to be able to keep that tradition going and I want to continue a lot of the stuff that, a lot of the work that he’s done been doing at Black Hawk. For many years, they’ve had their jazz festival, where they bring in a guest artist.

The atmosphere regarding music at BHC is more laid-back than many music schools. “It’s a cool thing to be involved with, ‘cause I think some music schools — every place has a different atmosphere and I think a lot of that is very top-down. Edgar is a very friendly, warm, caring person. And I think you see that in the atmosphere at the college, and that’s something that I really plan on continuing.

“I mean there’s some places where music can be kind of competitive and cutthroat, and you’ve got people trying to get the top spot or first chair, but the program at Black Hawk is not like that and it’s very friendly. It’s very supportive.” That’s how the arts should be, Kendrick said, as musicians literally collaborate and cooperate to perform together. “It’s not a competition, where there’s winners and losers. But it’s everyone just trying to better themselves. I think a supportive community like that just helps foster growth and helps get everybody where they’re trying to go.”

All help to create a rising tide, to lift all boats, he said. For Fall 2021, Kendrick will be teaching Jazz Ensemble, Theory of Music I, Music Appreciation and Applied Lessons on Piano. 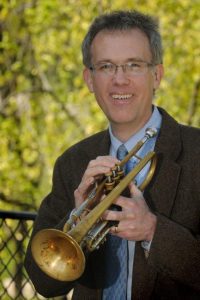 Jazz trumpeter Edgar Crockett, who retired this year from the Black Hawk music faculty, will perform for free Thursday outside the Figge Art Museum, Davenport.

Kendrick says another great thing about the music program at Black Hawk College is the small class sizes. “It allows for lots of individualized, one-on-one time to make sure everyone’s on the same page,” he said.

He plans to continue the BHC Jazz Festival that for more than 25 years has brought high-caliber visiting artists to campus.

“It’s a great way for students to gain experience playing alongside masters of the craft and to see the amount of hard work and dedication it takes to perform at that level,” Kendrick said.

“And it’s also a great opportunity for young musicians to see that their heroes are human and their goals are attainable,” he said.

Kendrick also plans to have the BHC Jazz Ensemble performing gigs in the community and eventually would like to start a summer jazz camp for high school and middle school band students.

“I’m very excited to be returning to Black Hawk College and the Quad-Cities. Some of my first teaching experience was at Black Hawk, so it feels full circle to be coming back to Black Hawk to teach again,” he said.

Crockett will play on Figge Plaza on Thursday

The Figge Art Museum and River Music Experience are hosting the Edgar Crockett Quartet Thursday (Aug. 12) outside on the Figge’s Bechtel Plaza from 5 p.m. to 7 p.m. Guests will be able to listen to jazz music, partake in jazz-inspired art activities related to jazz music, use drawing horses to sketch the band, and partake in food and beverages for purchase from the Figge Cafe’s Chef Stu.

This event is free and registration is not required. During his impressive career, Crockett has performed with Ray Charles, Roberta Flack, James Ingram, Peabo Bryson, Maureen McGovern, Shirley Jones, The Temptations, The Four Tops and many others.

Students interested in playing in the BHC Jazz Ensemble or who want to learn more about the BHC instrumental music program can contact Kendrick at kendrickc@bhc.edu. New BHC students can apply at www.bhc.edu/apply and returning students can register for Fall 2021 classes at www.bhc.edu/register.

You can hear Kendrick’s music and learn more at his website, http://coreykendrick.com/.