In a normal holiday season, about 6,000 people would see Ballet Quad Cities’ “The Nutcracker” at Davenport’s Adler Theatre, including a 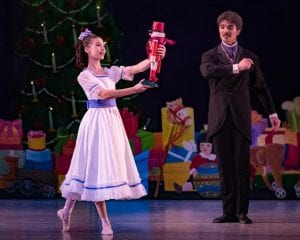 A scene from a past production of “The Nutcracker” by Ballet Quad Cities.

But of course, 2020 is anything but normal – so a select, supremely fortunate 180 patrons are able to enjoy a new “Nutcracker in the Round” 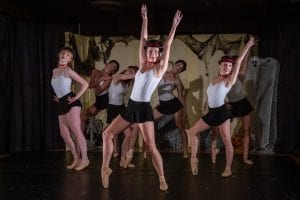 this month at The Outing Club, 2109 Brady St., Davenport. Due to the November Iowa restrictions for Covid prevention, a maximum of 15 guests are allowed to see the professional ballet company at one time, in a ballroom that can seat 500.

Ballet Quad Cities originally planned to present one weekend of holiday shows at their new venue (since they returned in August), but that was before Iowa Gov. Kim Reynolds announced new statewide restrictions on public gatherings last month, company executive director Joedy Cook said Tuesday. The BQC “Dracula” Halloween show at the Outing Club in October allowed 100 for each performance, she said.

“We sold out of so many performances, then the governor put limitations, so we tried to find as many places for people who purchased tickets as we could,” Cook said, noting that’s why they are doing 12 total performances last week and this weekend. “It’s a marathon. We would love the governor to raise that limit on Thursday, but we’re not holding our breath.”

“They’re having a wonderful time — everybody comes dressed to the nines,” Cook said. “They’re so excited to be out and about in the beautiful Outing Club, seeing the performance, eating delicious food.” 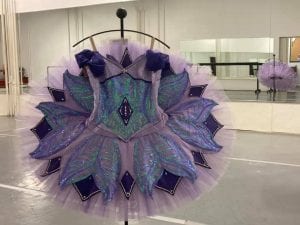 One couple last weekend came to see the ballet from St. Louis, because there are no live performances there.

“There is nothing to do in St. Louis,” Cook said. “This weekend, we have a couple coming from Chicago. Speaking to some people attending the performances, some never have seen ballet before. They are very hungry for live entertainment.”

While BQC gave people an option in October to virtually watch an online performance of the 2019 or 2020 “Dracula,” they are not offering that for “The Nutcracker” – which includes an abridged 30-minute version of the classic 1892 Tchaikovsky ballet, and a varied first act of holiday favorites.

“From the people I speak with – from our funders, from our donor base, people in general are tiring of watching things virtual,” Cook said. “It’s just not the same; there’s nothing to compare to a live experience.” 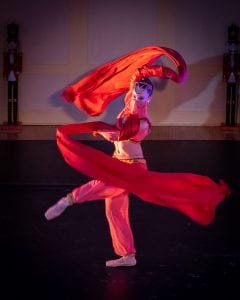 on lavish productions, that might be doing fine just virtually and selling tickets, but smaller ballet companies are not. There’s a very limited number doing that through virtual performances.”

“We are looking at all of our options to keep our organization in front of people’s faces,” she said of the 24-year-old company. “We’re just trying a lot of different things to see what will or will not work. I say myself, my staff and my board are 100 percent committed to live experiences.

“We don’t feel like the virtual is the wave of the future,” Cook said. “We’re gonna keep being on stage at the Outing Club until we can get back to venues in the Quad-Cities.”

With “Nutcracker,” the BQC dancers “are incredible,” she said. “It’s fabulous entertainment, delicious food. People were out with other people, having a really good time. Back in April, when things were not turning around quickly to perform in traditional theaters, the idea of Nutcracker in the Round has been in my head since last spring.

“It worked, and we will continue to come up with creative, unusual ways to entertain people in the Quad-Cities,” Cook said.

“It’s extremely well spaced out, and very safe,” she said of tables at The Outing Club, where guests are encouraged to wear masks, and performers are not required to. “It’s no different than going to a restaurant in Iowa, quite honestly.”

Getting creative with choreography

Artistic director Courtney Lyon really had to be on her toes to craft an alternative to the lavish, beloved “Nutcracker” – which requires a full-length set, a live orchestra, dazzling costumes, spectacular lighting (and of course, magical “snow”) to fully do it justice.

“I feel like it’s either do the whole thing, or really have to cut it down,” Lyon said Tuesday. “With the arc of the story, the excitement of the 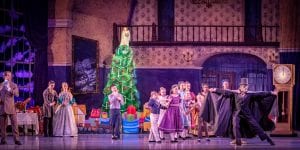 A scene from Ballet Quad Cities’ “The Nutcracker” at the Adler Theatre.

battle scene, letting the music play for a long time, the passing of time, all that stuff in storytelling. In keeping the arc of the story appropriate, I just cut out.

“I’m really excited, in the Outing Club, we’re not performing for a large audience. We still have a great group of expressive dancers, so why not do something different?” she said. “Why not really showcase them in all their styles, have fun at the holiday season?”

So in the hour-long show’s first half, BQC dances to many holiday favorites, in short scenes – like dancing reindeer, a tap-dancing Santa, a Hawaiian snow globe, ice skaters and a fun pas de deux, Lyon said.

“The first half we are treating like a pre-show. It’s not the Nutcracker,” she said. “It is a holiday variety act — we have some jazz, some tap, more contemporary dance, more theatrical pieces, to get people laughing, in the holiday spirit, the holiday mood.”

For the half-hour “Nutcracker,” Lyon presents the main characters, with young Clara getting the Nutcracker doll from the toy maker 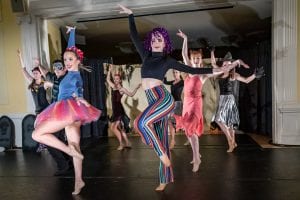 Drosselmeyer, the rat battle scene, and they skip the snow scene, she noted.  Seconds act is N in 30 minutes.

“We move right away into the variations of act 2, and what’s kind of fun, I have taken the liberty of recreating, took different versions of Tchaikovsky, so it’s not so formal,” Lyon said. The recordings include strings, brass, jazzy and classical versions of the score. “That adds to the feeling of, this is a different kind of performance. It’s the same story everyone loves, told in a slightly different way.”

This version does include the iconic Spanish, Arabian, Chinese, and Russian dances, plus the Dance of the Flowers and Dance of the Sugar Plum Fairy.

“It’s the greatest hits, and a cool way of featuring our costumes,” Lyon said. “The costumes are really beautiful, designed to be opulent, inspiring. It’s an opportunity for the audience to see the costumes up close, which is kind of cool.”

The intricate sugar plum fairy tutu was designed and stitched locally, by longtime BQC costumer Adele Forest, who put together all the crystals, sparkles, and other embellishments.

Joedy Cook also cooked up a new way to make up for lost revenue this year, as she got sponsors to cover the cost of a new “Nutcracker in a Box.” For $100, you can get: 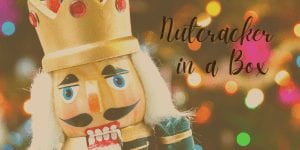 You can get a “Nutcracker in a Box” for $100 to help the company during this difficult year.

“I realized we could not be doing a full-length Nutcracker at the Adler, and this is a way to support the ballet,” Cook said. “Eat these famous sugar cookies, have a beautiful signed photograph, have a fun bag, and a one-of-a-kind Nutcracker.”

Ballet Quad Cities has lost over $100,000 this season due to canceling its large productions, so you can enjoy a special “Nutcracker” experience at home this year with the goodies.

It was 100-percent paid by sponsors — Brian and Barb Cady, Steve and Jodie McGuire, and The Green Thumbers, Cook said. The ballet company is also providing free video “Nutcracker” links to all 3rd graders in Rock Island and Davenport, to make up for missing the live production, she said.

Last weekend’s seven performances was a challenge for the dancers, Lyon said.

“It’s a physical show, being very animated,” she said. “Being close to the audience, projecting to the audience, they get that connection. It gives back to them (the dancers); it gives them energy.” 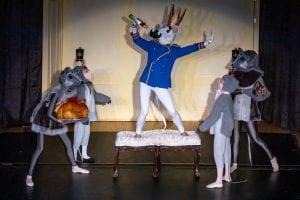 The Rat Queen (Rachel Martens) during battle in “Nutcracker in the Round” at The Outing Club.

The Adler Theatre also helped sponsor by advertising the new production, and people could pick up their gift bag at the Adler. The “Nutcracker in a Box” is on sale through Dec. 20, at http://balletquadcities.com/Nutcracker-in-a-Box, and it can be delivered.

There is a waitlist for tickets to this weekend’s five performances and they are prepared to add more seating, if things may change, Cook said.

“This has been such a whirlwind I can’t tell you. Every day, something changes,” she said. “Myself and my staff love this ballet company, so we are going to do everything and anything in our power to get through the next few months.” 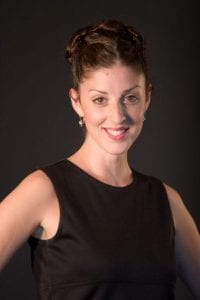 The menu choices include: