Despite the 2019 flood and 2020 pandemic, the Quad-Cities’ Lopiez Pizza is growing by leaps and bounds – to open their third location next month at Analog Arcade Bar, 1405 5th Ave., Moline.

Analog – which opened New Year’s Eve 2018 – is itself a sister bar to the first Analog Arcade Bar in downtown Davenport, which opened in 2015 at 302 Brady St. The Moline location has about 80 games, including pinball machines and old-school arcades, with a 36-foot bar and 20 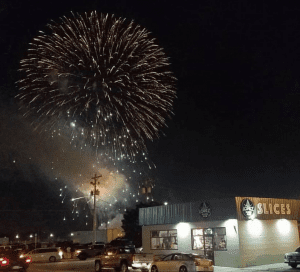 Fireworks over Lopiez in downtown Davenport in July 2019.

It’s temporarily closed due to Illinois Covid-19 restrictions, but Lopiez co-owner Andrew Lopez said Wednesday they will open in mid-January for takeout and delivery service only. Hours will be 4 p.m. to 10 p.m. weekdays and noon to 10 p.m. on Saturdays and Sundays.

Lopiez offers limited dine-in and pickup at 429 E. 3rd St., Davenport, and opened a second location for takeout and delivery in March at 2832 Brady St., Davenport. They will be replacing Streets of Italy as the full-service kitchen at Analog Moline.

“Unfortunately, Streets of Italy had a hard time keeping the doors open, especially during Covid, so we basically are going in there to pick up the sales and stimulate the downtown economy as much as we can,” Lopez said Wednesday. “Dan thought it would be a good idea to have our style of pizza with his style of bar and I fully agree with that.

“I think pizza, beer, pinball, video games – that all goes together 100 percent,” Lopez said. “We want to make sure we’re good and safe before we start implementing dine-in. We’re just playing that part by ear.”

“I’d rather not try to compare Lopiez to Streets, but Andrew and Peter used to work as bartenders at Analog prior to open Lopiez, so we have already had a strong working relationship and an understanding of how the other operates,” Analog co-owner Dan Bush said of brothers Andrew and Peter Lopez. 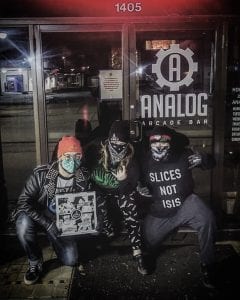 “We are big fans of theirs and thinks our brands fit really well together. We knew they were looking to expand into Illinois and we are excited that they’ll be doing it with us,” Bush said.

Lopiez’s Davenport opening (planned for April 2019) initially was delayed by the flood downtown, and was pushed back to June 28, 2019. “We had a lot of community backing since we just got through the flood at that time,” Lopez said. “That just kind of helped us out with the first few months. We were really doing good, and when Covid hit, we took a hit.”

This summer took off for delivery, he said. “We can do contactless delivery, whatever you want, and that’s really helped out. We had to scramble to figure out how to work during these hard times. We found out online ordering was a big deal too, that people really wanted to use.” 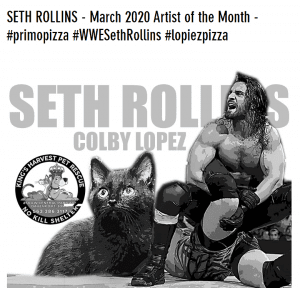 March at 2832 Brady St., Davenport, at a former pizza place, for takeout and delivery only. “I think we’ll make it out of this whole Covid thing OK,” Lopez said.

“Downtown, we have takeout and dine-in, down to 50 percent capacity. So we can’t have too many people dining in,” he said. “It’s pretty small downtown.”

For Moline, they’re transferring some of their best employees from existing locations, and expect to hire 10 more once they have dine-in, Lopez said.

This past spring was a scary time. “We were hoping for the best,” he said. “We knew we needed to have a second location mainly for delivery. Our downtown location, the kitchen is so small. It would have been almost impossible to start delivery downtown. The uptown location is in a sense the same location – it’s all a flowing thing.”

In Moline, Lopiez will have a professional wrestling theme, including photos. Their famous cousin, Colby Lopez (WWE name Seth Rollins), plans to donate some things, Andrew said. “He was actually one of our artists of the month and he donated his money from the proceeds to King’s Harvest animal shelter. That was pretty cool.” 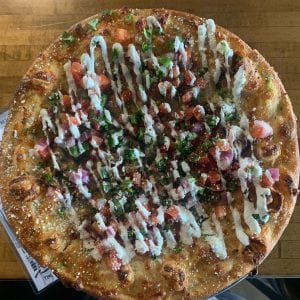 Lopiez has a charitable ALTA (Alliance of Local & Touring Artists) program, to help support comedians, painters and filmmakers, as well as artists in animation, drawing, graffiti, performance, photography and sculpture.

​Selected artists of the month name their pizza and choose the toppings, then Lopiez sells their pizza for a month, and at the end of the month donates 10% of their pizza sales back to the artist. Most choose a nonprofit organization to give their proceeds.

Lopiez called the pizza “primo,” which means “cousin” in Spanish, since that’s what he is to Lopiez owners Andrew and Peter Lopez.

King’s Harvest is where Colby got his champion cat Darrell. King’s Harvest is a no-kill, non-profit serving the area with the goal to take in homeless and surrendered pets and finding them loving, forever homes.

In October 2019, Peter Lopez traveled to Des Moines with UFC legend Pat Miletich and crew to see Tom Arnold at the Funny Bone and help in shooting some footage for a pilot show idea. The Lopez brothers grew up with a steady diet of “Roseanne” on the tube, a show that Arnold worked on as a writer and actor, so Peter was excited at the chance to meet him in person, the Lopiez website says.

“At the end of Tom’s show, he took the time to sign autographs and raise money for his charity, The American Heart Association, so it gave Lopiez the idea to ask Tom to be a future artist of the month.”

The December pizza is from the Illinois band The Copyrights, and they are donating their sales to NAMI of the Greater Mississippi Valley, which helps families and individuals dealing with mental health disorders. The “Charlie Birger” features ground beef, onion, pickles & Shady Rest sauce on agave buttered crust & signature red sauce. 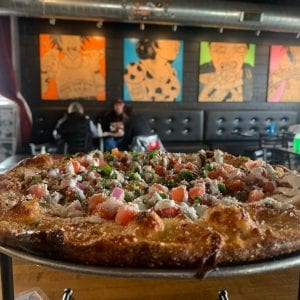 The Lopiez food truck is put away for the winter, and should return in March, Lopez said. They literally are a family business, since brother Mike works for them, as well as cousins.

Jonathan Turner
Jonathan Turner has been covering the Quad-Cities arts scene for 25 years, first as a reporter with the Dispatch and Rock Island Argus, and then as a reporter with the Quad City Times. Jonathan is also an accomplished actor and musician who has been seen frequently on local theater stages, including the Bucktown Revue and Black Box Theatre.
See More Articles From Jonathan Turner
Advertisement
Tagged: andrew lopezblake dhaemersbrittany dhaemersColby LopezDan BushLoPiezmike lopezpeter lopezSeth Rollins