Get your tickets here: 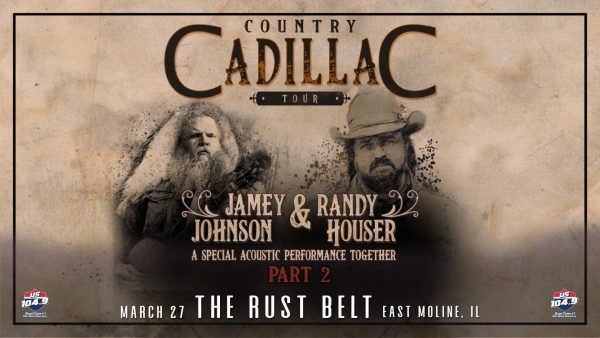 Eleven-time Grammy-nominated singer-songwriter Jamey Johnson is “one of the greatest country singers of our time,” according to the Washington Post. He is one of only a few people in the history of country music to win two Song of the Year Awards from both the CMA and ACMs. His 2008 album, That Lonesome Song, was certified platinum for 1 million in sales, and his 2010 ambitious double album, The Guitar Song, received a gold certification.

In addition, he won two Song of the Year Trophies, for “Give It Away” and “In Color,” both from the Academy of Country Music and the Country Music Association. He has received tremendous praise from The New York Times, Rolling Stone, The Wall Street Journal and other publications, many of which have hailed his albums as masterpieces.

With an inimitable voice the New York Times describes as “wholly different, thicker and more throbbing, a caldron bubbling over,” Randy Houser racked up three consecutive No. 1 hits with his album, How Country Feels, plus earned critical acclaim for his powerful delivery of the Top 5 smash and CMA Song of the Year-nominated “Like A Cowboy.” Houser added a fourth No. 1 to his catalogue with “We Went” from his 2016 album, Fired Up.

Houser’s fourth studio album, Magnolia, marks a new era for the singer/songwriter which many have called “Houser at his best.” Listeners got their first taste of Houser’s critically acclaimed rootsy project with the Top 30 hit “What Whiskey Does,” which debuted at Country radio as #1 Most Added and Rolling Stone immediately dubbed “a classic tears and-twang drinking song.” The album which NPR claims is home to “some of the most expressive performances of his career,” also includes his single, “No Stone Unturned,” a gypsy-hearted traveling song that Whiskey Riff calls “the best song, from the best album of 2019.”