As of Thursday, Sept. 9, 2021, the month of September has been declared the HAVlife™ Preventing Lost Potential™ Month in Iowa, this year and every year. Governor Kim Reynolds made this action official with the signing of an official proclamation in a private ceremony in her office in Des Moines, IA. 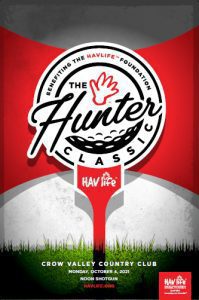 The Hunter Classic is one of many charitable events put on by the HavLife Foundation.

According to the proclamation, “WHEREAS, the month of September has been designated as Preventing Lost Potential Month by the HAVlifeTM Foundation; and WHEREAS Preventing Lost Potential Month is to be an annual month of celebration and provides a renewed focus on the importance of and dedication to educate, encourage, protect and develop our community’s youth; and WHEREAS, the HAVlifeTM Foundation serves as an advocate for all schools, nonprofit organizations, sports clubs, civic organizations, government programs and religious institutions that place emphasis on valuing and caring for youth; and WHEREAS, this month initiates an ongoing movement to make the State of Iowa the best place in the nation for youth; and WHEREAS, the State of Iowa recognizes that this effort is successful because of the partnerships the HAVlifeTM Foundation has formed with residents, businesses, community and state of Iowa organizations: NOW, THEREFORE, I, Kim Reynolds, Governor of the State of Iowa, do hereby proclaim September 2021 as PREVENTING LOSS POTENTIAL MONTH.”

“I’m honored that the governor is helping to spread the good word about the foundation and its goals,” said Mike Vondran, Founder of the HAVlife™ Foundation and CEO of TAG, a Quad-Cities-based marketing firm. This proclamation helps to define the vision and mission of HAVlife™: to serve the communities’ youngest at-risk citizens, by working with area leaders and advocates of youth to Prevent Lost Potential and foster discovery and passion for athletics, music, and the performing arts.

The HAVlife™ Foundation, a 501(c)(3) organization based in the Quad Cities, raises and distributes funds to help young people participate in activities they usually wouldn’t be able to afford. Ages 10 to 15 are special years for young people, when the hopes and dreams of childhood develop into the achievements of adulthood. But for some, financial burdens and life’s obstacles can crush their dreams and block their ambitions. These young people are at risk of entering adulthood filled with doubt and frustration.

HAVlife™ Foundation’s primary goal. The foundation was founded in 2007 in the memory of Hunter Aaron Vondran, who died at age 13 as the result of an accident. His family – father Mike Vondran, mother Brenda, and older brother Baron – chose to honor Hunter’s memory through service to the community.

“HAVlife™ works to keep young people active and engaged,” said Kimberly Guy, President of the HAVlife™ Foundation. The foundation has been providing support to at-risk youth for 14 years. In that time, the organization has given over a million dollars to assist more than 10,000 young people throughout Eastern Iowa and Western Illinois.

The HAVlife™ Foundation has three chapters of service: Quad Cities, Tri-States (Dubuque), and Johnson County (Iowa City). The organization supports schools and organizations with grants, encouraging youth to participate in the areas of music, arts, and athletics – fields of endeavor once enjoyed by young Hunter.

By providing scholarships in athletics, music and the arts, the HAVlife™ Foundation turns lost potential into achievements and points of pride. Last year, the foundation raised nearly $40,000 through its annual Hunter Classic golf event, and those funds helped to finance activities that might have fallen through the cracks, as school and family budgets run short. Things like music lessons and vocal camps, athletic supplies and participation fees …  costs that can keep a kid from stretching and sometimes soaring.

The next fundraising project being orchestrated by the HAVlife™ Foundation is the 2021 Hunter Classic, which will be held Monday, October 4, 2021, at  Crow Valley Country Club, 4315 E. 60th Street, Davenport, IA. Funds raised will provide participation scholarships in the area of athletics, music, and the arts that will turn lost potential into actual achievements for many young people. You can learn more about the event online at: https://quadcities.havlife.org/events/2021-hunter-classic-benefiting-the-havlife-foundation

A few months after the Hunter Classic, the HAVlife™ Foundation will hold its Martini Shake Off™, an event which has been very popular in the Quad Cities in the past. The event will be held Feb. 17, 2022, at the RiverCenter, Davenport, IA.