Downtown LeClaire has long been a popular Quad-Cities destination for its quirky, locally-owned shops, the Buffalo Bill Museum and Riverboat Twilight cruises, scenic riverfront, and its excellent variety of food and drink establishments.

“It was just organic, and it grew, and we never had to market it, which was great because people just moved first right into it,” Burchett said 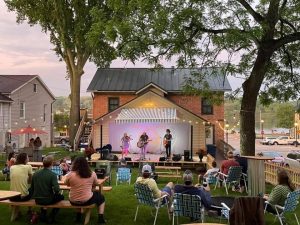 recently, noting other venues added local musicians as well. “It’s just one of those things that’s kind of evolved here in LeClaire and is something that’s kind of cool.”

After Covid challenges for the bar and restaurant industry, Burchett worked with the LeClaire tourism bureau to rebrand the First Friday series as “Friday Night Live,” re-launching this past June at eight LeClaire businesses.

“It’s that we’ve got all this music going on, and try to brand it as something hip and cool and fun to do. And just get back by people thinking about it a different way,” Burchett said.

It was perfectly timed, as MRDC moved its live music in August to the rooftop of its new three-story Celebration Center, which is billed as “the ultimate spot for your next wedding, party, corporate event or meeting. Just next to our riverside distillery and Cocktail House, the Celebration Center includes amazing river views, a one-of-a-kind look and feel, a rooftop patio, and a whiskey cellar.”

“We consciously moved it over there for a couple of reasons,” Burchett said of Friday Night Live. “Number one, people really want to see it, and two, we know that when they do something there, they’re going to love it, and they’re going to tell more people about it. So it’s a great marketing opportunity for us.”

The Friday Night Live for Sept. 3 features the following schedule:

“Typically, on any given Friday in the summer, we’ll have four or five live music places, so we played it up,” Cindy Bruhn, LeClaire tourism manager, said recently, noting there’s also a variety of musical styles to suit everyone’s tastes.

“People are looking for something to do on the weekends,” Bruhn said. “We’ve definitely become more established as a music venue, and when there’s such a variety, there’s something for everyone and it’s basically free.” 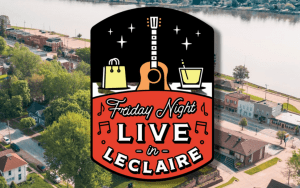 The owner of the year-old Dirty Water Music (in an 1852 building formerly occupied by an olive oil company) is Ray “Doc” Burge, a retired chiropractor and medical doctor. He has his own band, the Dirty Water Boys. Many times, he plays Thursday nights at The Faithful Pilot. Bruhn loves his outdoor live music setup, with a stage and a backyard setting, strung with lights.

Wide River Winery, next to Dirty Water Music, has had live music outside on their patio since at least 2014. Wide River has music from 5 to 8 p.m., and Dirty Water typically starts at 8 p.m., so they don’t clash, Bruhn said.

“It’s really not just first Fridays; it’s every weekend and special events,” Bruhn said. “With Ryan’s new facility, that’s just going to open it up to so many things. That’s going to be great for different things.”

It was rebranded “Friday Night Live” this spring with the MRDC’s new Celebration Center. There have been eight venues each month, except nine the first Friday in August, with a special guest at 129 wine bar (at 129 N. Cody Rd.)

Significant in both architecture and history, Cody Road honors a rich variety of mid-to-late 19th-century building construction and aesthetic design, according to visitleclaire.com. “In its entirety, you’ll literally walk through history as you observe a near-seamless blend of the old with new. Fan-favorite restaurants, iconic boutiques and gift shops, and incredible residential views of the river remind us of the relative simplicity of life,” the site says.

“I wanted to start a venue that brings music to the community, not only the live venue, but lessons and a recording studio,” Burge said recently of Dirty Water, named for the Mississippi River one day when he was on his boat. “With our outdoor stage, we really accomplished being able to have decent-sized artists come in, to have that kind of show.”

His first event was last September, outdoors with a Nashville artist and he has an indoor space that can hold 35 people, with a bar and small stage. Burge has either single artists or duos every weekend, and he began outdoor music again this past May.

“What we’re hoping to do is getting bigger and bigger artists to come this way,” he said. “I have friends from the Nashville area and Texas and will bring those guys up.”

Of Friday Night Live, Burge said: “I think it’s awesome. It works out great for us since we’re down by the winery. They go 5 to 8; we go from 8 to 11. It’s great, with a lot of people walking around.”

Mikey Loy – the guitar tech for The National, a nationally-known rock band – bought the Riverview Roadhouse (north of the center of LeClaire at 701 N. Cody Rd.) – in February, after the shut down of Covid.

“When they asked me if I’d participate, I wanted to focus more on musical sensibility,” Loy said recently. “Having toured my whole life with musicians, I was really into that. Being more a dive bar, I spent on the parking lot, property, and the Bison Bridge Foundation sponsors our stage. I wanted to come out with a bang; being the first time I purchased a bar, I wanted to make an impact, showing you can do similar things like Alternating Currents is doing.”

Loy has had crowds of up to 400 people outside for live music. The first Friday in June was his most significant.

“There’s kind of a taste for everyone,” Loy said. “It’s super eclectic, people walking up and down Cody Road. It gets pretty crazy. We’re a little north of the action.”

“In the nerdy world, does it up the gross number a lot?” Loy said of Friday Night Live. “Yes, and that helps the future of this bar. When I bought the bar, it was a struggle. The stage was a large expense. For me, as an owner who lives in the community, it’s nice. You can come get a burger every day of the week. The bar is busier because of it. It’s worth it.”

“It’s a really good vibe. The police are supportive, make sure the traffic is safe,” Loy said. “The community seems to be rallying together. I would love to do that, make it work, make sure there’s enough music to make it work. It’s hard to get bands. We’re just trying to do something cool for people coming in. It’s a free show for everyone who wants to go. It’s not really an economic structure… It’s just a straight-up, music block party in a sense — people come and shop, eat and drink.”

Loy and Burchett and some others will continue Friday Night Live year-round, hosting live music indoors.