Tristan Tapscott June 12th, 2022 Things To Do, Online Entertainment, Food, Colona, Events Share:
Join the Colona Library as they present An Evening with Chef Kwame Onwuachi on June 22.
Top Chef contestant and award-winning chef Kwame Onwuachi will discuss his cookbook My America: Recipes from a Young Black Chef. His cookbook celebrates the cuisine of the African diaspora, “the world’s wisest food.” Onwuachi will share stories behind his family’s recipes, and the importance of the connections between cuisine, place, and culture.
A James Beard award-winning chef, Onwuachi was also named Food & Wine’s best new chef in 2019 and Esquire’s chef of the year in 2019. He has opened several restaurants and was the executive chef at acclaimed Kith/Kin in Washington, D.C.
Register here: https://bit.ly/June22_KwameOnwuachi 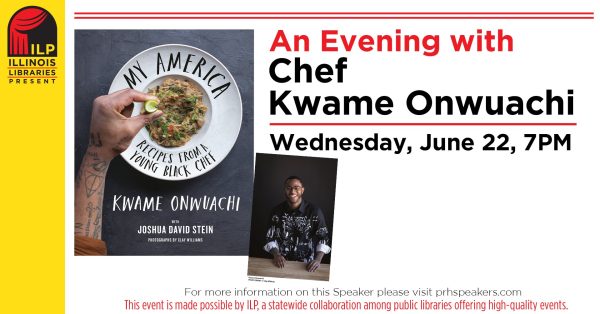 This event is made possible by Illinois Libraries Present, a statewide collaboration among public libraries offering high-quality events. Illinois Libraries Present is funded in part by a grant awarded by the Illinois State Library, a department of the Office of Secretary of State, using funds provided by the U.S. Institute of Museum and Library Services, under the provisions of the Library Services and Technology Act (LSTA).