Sean Leary November 21st, 2018 Things To Do, Theatre, Rock Island, Local, Fun, Family, Events, Entertainment Share:
You won’t knock this wood — for its first family musical of the 2018-19 season, the Circa ’21 Dinner Playhouse brings a beloved fairytale figure and his many friends and foes to life in the family treat PINOCCHIO. Running through December 29, this enchanting tale of a wooden puppet who longs to be a real live boy will charm audiences of all ages with its wonderful score, hilarious antics, and memorable characters, and is being brought to life by a fantastic cast of professional talents. 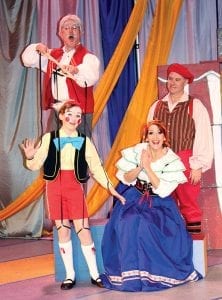 Circa ’21 will present show-only performances of PINOCCHIO on November 24 and 30, as well as on December 1, 4, 8, 11, 14, 15, 18, 20, 22, and 29. Doors open at 9:30 a.m. for the 10 a.m. performances, with tickets $11 per person.  Added 1 p.m. matinées (with doors at 12:30 p.m.) have been scheduled for December 8 and 15.
Brunch performances also will be held on PINOCCHIO’s opening day of November 23 (with the event featuring a visit by Santa), as well as every Sunday from November 25 through December 23. Doors for these presentations open at 10:45 a.m., the buffet opens at 11 a.m. and the shows begin at noon. Tickets are $21 for adults, $19 for ages 6 – 18, and $16 for ages five and younger.
For tickets and information, contact the Circa ’21 Dinner Playhouse at 1828 Third Avenue, Rock Island, IL, 309-786-7733, ext. 2 or visit Circa21.com.
Set in Italy, PINOCCHIO tells the beloved tale of a boy-sized puppet built by the caring puppet-maker Geppetto. Knowing of his longing for a son, the Blue Fairy brings Pinocchio to life to reward Geppetto’s remarkably generous spirit. Pinocchio is told by the Blue Fairy that if he always obeys his father, she will turn him into a real boy. The best-laid plans can sometimes go awry, however, and Pinocchio’s boyish longings lead him away from his father and on an adventure like no other.
As it takes its title character from the Land of Toys to the belly of a whale, the musical version of PINOCCHIO brings the classic literary and Disney tale to delightful stage life, resulting in an entertainment the Prince Street Players called “the perfect piece for a theater with young audiences.”
Directing PINOCCHIO is longtime Circa ’21 veteran Warner Crocker, who recently helmed the venue’s hit comedies “Mama Won’t Fly” and “Always a Bridesmaid.” Pinocchio himself is played by Brennan Hampton, whose previous Circa ’21 credits include roles in “Freaky Friday”, “The Music Man” and “Elf: The Musical.”  Geppetto is portrayed by Tom Walljasper, currently in the theater’s current “Annie,” who also played the puppet-maker in Circa ’21’s 1999 presentation of PINOCCHIO. Joining Hampton and Walljasper are eight additional stage talents: Julian Anderson, Danielle Fattore, Brad Hauskins, Sarah Hayes, Janos Horvath, Deb Kennedy, Brooke Myers and Michael Penick.
Circa ’21 is thrilled to be treating family audiences to this early holiday present and encourages audiences to make immediate reservations at 309-786-7733 ext. 2 for the joyous, wondrous and truly magical experience of PINOCCHIO!