Einstein’s Sister will release their first record in almost two decades TODAY at Record Store Day at CoOp Records in Moline! Throughout this week we’ve been recapping the band’s career in our special Einstein’s Sister Spotlight on QuadCities.com! The following is the first review Sean Leary wrote of the band’s recorded material, reviewing the first Douglas and Tucker album, titled ‘Einstein’s Sister.’ The review first ran on Sean’s blog, What The *&^%^&** Is Sean Leary Thinking, on April 11, 1996.

If so, you might want to check out “Einstein’s Sister,” the debut CD by local tunesmiths Bill Douglas and Kerry Tucker. “Sister” is a beautifully melodic record, full of hummable, multi-layered tunes — the same kind of songs that the aforementioned British group excelled at sculpting. 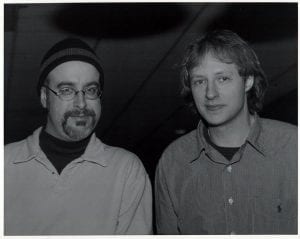 Sounding like that band’s brilliant songwriting tandem Chris Difford and Glenn Tilbrook is no bad thing. After all, that duo was once called “the Lennon and McCartney of the ’80s” by Rolling Stone. But what’s even more impressive is that such a compliment is a pretty good barometer of the talent demonstrated here.

To say that Douglas and Tucker have come up with an incredibly strong debut is almost an understatement. This is without a doubt one of the best locally-produced discs I’ve heard in the two years I’ve been in the Quad-Cities, and it’s probably one of the most enjoyable albums I’ve heard so far all year — bar none. Both the material and the production done by the band are major label sharp, and the songs are witty and well-crafted.

“Juliette’s in Waiting” has a sugary chorus, couched by mellifluous harmonies and thickened by some Ringo-like drum punches. A guitar solo that breaks into a teeny sample of Crowded House’s “Something So Strong” is another great touch.

The interplay of voices in “Don’t Let Our Eyes Meet” is another great moment, as the lead vocal drops to a secondary role to let in string of wan lyrics from the harmony voice.

“Play God,” a favorite of many other local critics was unfortunately one of the less enjoyable songs on the disc for me, but I’m not really into social commentary songs.

Sounding like a mish-mosh of the Police, Payola$ and Crowded House, “Love is Habit” has a spartan feel but still retains a full sense of melody.

Calling Bill Douglas and Kerry Tucker the Lennon and McCartney for the ’90s may seem a little cheeky, but calling them such for the Quad-Cities is certainly no stretch, as one spin of this disc will prove to skeptical ears.

Sean Leary
Sean Leary is an author, director, artist, musician, producer and entrepreneur who has been writing professionally since debuting at age 11 in the pages of the Comics Buyers Guide. An honors graduate of the University of Southern California masters program, he has written over 50 books including the best-sellers The Arimathean, Every Number is Lucky to Someone and We Are All Characters.
See More Articles From Sean Leary
Advertisement
Tagged: Bill Douglasdouglas and tuckereinstein's sistereinstein's sister spotlightkerry tuckermusic reviewsquadcities music scene