MACOMB, IL – For the fourth year in a row, a member of Western Illinois University’s chapter of The Honor Society of Phi Kappa Phi has been awarded a national fellowship to pursue graduate study.

Mariah Dicksen, of Lockport, IL, who graduated from WIU in May with a degree in biology, has been awarded an $8,500 fellowship to pursue a Ph.D. in microbiology at the University of Wisconsin-Madison this fall. She was a member and a student vice president with the WIU Phi Kappa Phi chapter and a student in the Centennial Honors College.

In 2019, Dicksen became the first female WIU student to win the renowned Barry Goldwater Scholarship, and the first WIU student to be nominated for the prestigious Rhodes, Truman and Goldwater scholarships. She was also named WIU’s recipient of the 2019-2020 Lincoln Academy of Illinois’ Student Laureate Award. The prestigious award, presented annually to an outstanding senior of each of Illinois’ four-year degree-granting institutions, honors a student’s overall academic excellence and participation in extracurricular activities.

Dicksen was named the winner of the WIU chapter’s $500 Phi Kappa Phi Fellowship this spring. The honor qualified her to compete for the national award.

“Receiving the Phi Kappa Phi Graduate Student Fellowship means so much to me,” said Dicksen. “This fellowship is a reflection of the support I feel from PKP and WIU as I begin the pursuit of my Ph.D. in microbiology at the University of Wisconsin-Madison. It is so encouraging to know that this organization believes in my ability to change the world through my research. I am extremely proud to represent Western Illinois University and Phi Kappa Phi as I move forward with my studies.”

Dicksen said she is most excited to work with her doctoral professors to study and eradicate viruses.

“Ms. Dicksen’s work with the WIU Centennial Honors College faculty, advisors and administrators was instrumental in preparing her as a viable candidate to compete for these nationally known awards,” said WIU Professor Emerita Katharine Pawelko, Phi Kappa Phi chapter president. “As the recipient of the 2020 Phi Kappa Phi Graduate Fellowship, Mariah’s award continues a long-standing tradition of student achievement and excellence at WIU being recognized on a national level.”

Dicksen said the best part of being inducted and serving the WIU Phi Kappa Phi chapter is the connections formed through service and academics. 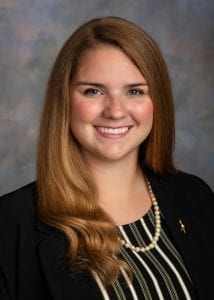 “As a student vice president on the executive board of the Phi Kappa Phi chapter at WIU, I was able to help establish new Little Free Libraries in our community and organize book drives on campus,” she said. “Through these projects, I was able to form relationships with students and professors that I otherwise would not have met.”

Since its creation in 1932, the fellowship program has become one of the society’s most visible and financially well-supported endeavors, allocating $345,000 annually to deserving students for first-year graduate or professional study.

The selection process for the Phi Kappa Phi Fellowship is based on the applicants’ evidence of graduate potential, undergraduate academic achievement, service and leadership experience, letters of recommendation, personal statement of educational perspective and career goals and acceptance at an approved graduate or professional program.