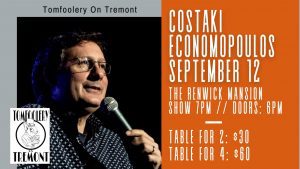 Costaki will perform at 7 p.m. Sept. 12.
General Admission: $15; Table: $35
The biggest name in comedy! For 20 years Costaki has been living his dream as a full-time stand up comic. He has written jokes for Bette Midler, Jay Leno, MTV and BET. You may have seen him on Showtime, or heard him on Sirius, but you probably know him best from his regular appearances on the nationally Syndicated Bob & Tom Show.
TIX, Gen Admission: https://www.eventbrite.com/…/tomfoolery-on-tremont…
TIX, Table: https://www.eventbrite.com/…/tomfoolery-on-tremont…

Sean Leary
Sean Leary is an author, director, artist, musician, producer and entrepreneur who has been writing professionally since debuting at age 11 in the pages of the Comics Buyers Guide. An honors graduate of the University of Southern California masters program, he has written over 50 books including the best-sellers The Arimathean, Every Number is Lucky to Someone and We Are All Characters.
See More Articles From Sean Leary
Advertisement
Tagged: COSTAKI ECONOMOPOULOSquadcities comedy sceneRenwick MansionTomfoolery on Tremont