BREAKING NEWS: Over & Under: Wildlife Crossings, a documentary short film produced by Quad Cities-based Kelly and Tammy Rundle of Fourth Wall Films, received the top Award of Excellence from the Iowa Motion Picture Association in the Educational Production category 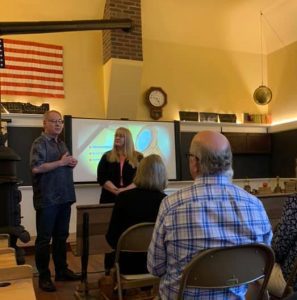 Moline-based filmmakers Kelly and Tammy Rundle at the recent opening of their new museum film for the restored Forest Grove School in Bettendorf.

The 30th-annual award ceremony took place at the Bridge View Center in Ottumwa, Iowa. IMPA awards recognize outstanding creative and technical achievement in Iowa’s moving-image production industry, in all its forms. Entries must have an Iowa connection.

“We are honored that Over & Under: Wildlife Crossings was recognized by the IMPA,” producer Tammy Rundle said Monday. “This Award of Excellence is shared with BeWildReWild and Iowa Natural Heritage Foundation.”

Over & Under depicts the need for wildlife crossings, and showcases two successful turtle crossing projects in Iowa and Wisconsin. The nine-minute film raises awareness of “wildlife corridors,” and how roads and highways often block these vital animal pathways. 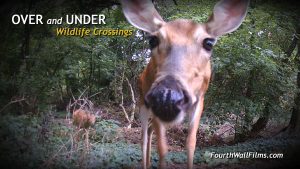 An image of deer in the Rundles’ new wildlife film.

BeWildReWild is a loosely-knit group of volunteers with a passion for wild things,” according to bewildrewild.org.

“It is also a special fund for the purpose of exploring three questions: What do you/we mean by wild? What lifestyle changes are needed for us to live within the bounds of sustainability? How can we create a wilder, more beautiful, more biologically diverse, and a more enduring Mississippi River Watershed?” the site says. 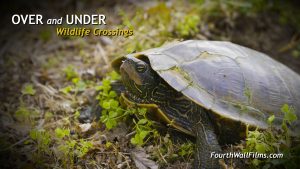 “Over & Under: Wildlife Crossings” won the top award for excellence in the educational category of the Iowa Motion Picture Association.

The Fourth Wall short film examines the effectiveness of adding wildlife crossings over or under highways as a solution that benefits animals on the move. Crossings also diminish the property damage and human injury or death that can result from animal/vehicle collisions.

An average of 2-3 Iowans die each year in collisions between automobiles and deer, according to a Fourth Wall Films release.

“I wish we didn’t have to think of it in terms of money,” said Mark Edwards, conservationist and BeWildReWild volunteer. “But rather in terms of overall health—human health; wildlife health; the health of the place we live.” 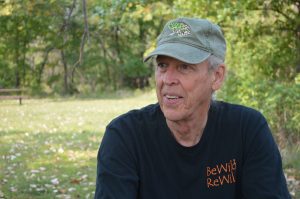 Mark Edwards, a volunteer for BeWildReWild, a group that works to support a wilder, more biologically diverse Mississippi River watershed.

Last year, the Rundles’ docudrama Sons & Daughters of Thunder (based on a play by Earlene Hawley and Curtis Heeter) received eight IMPA nominations, and won seven awards — five Awards of Excellence and two Awards of Achievement.

Principal photography for “Over and Under” took place in Cedar Rapids and the Iowa River Greenbelt in Hardin County; and in La Crosse and Stevens Point, Wis. It is available to view free 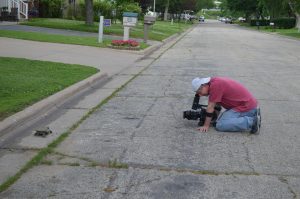 Kelly Rundle filming a turtle for “Over & Under.”

Over & Under: Wildlife Crossings was funded by the BeWildReWild Fund at Iowa Natural Heritage Foundation.

Kelly and Tammy Rundle are the owners of Moline-based Fourth Wall Films, an Emmy-nominated and award-winning independent film production company.

They also recently premiered a 10-minute museum film, “Remembering Forest Grove,” which is on permanent display in the restored 1873 Forest Grove School. The one-room school, 24040 Forest Grove Drive, Bettendorf, was reopened May 22 and is open Saturdays 9 a.m. to 11:30 a.m., with tours available, free to visitors of all ages, with donations welcome.