The sea life captured on canvas by Buckles reflects his fascination with these creatures – mostly sharks, but sea turtles, dolphins and sea otters as well — and his passion for raising awareness and funding for the “proper management of marine life for generations to come,” according to a statement on his website.

Buckles’ paintings are featured in a new show, “Art for the Sea” at Beréskin Gallery and Art Academy, 2967 State St., Bettendorf. The opening reception featuring the artist is 5:30-7:30 p.m. on Friday, Aug. 7. Masks are required, and social distancing will be practiced. The show runs through Aug. 27. 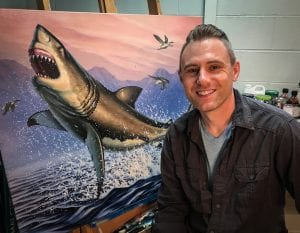 Brian Buckles with his painting of a shark.

Buckles, a 2002 graduate of Bettendorf High School, is excited to be bringing his artwork to his hometown. His parents, Rick and Terry Buckles, still live in Bettendorf.

A graduate in Graphic Design from Iowa State University, Buckles is often asked how he became passionate about sharks. He fell in love with the ocean for the first time as a preschooler during one of many family vacations on the West Coast, the artist said in a gallery release.

“I was obsessed with sharks from three years old on,” Buckles said. In elementary school, he would find a way to creatively work a shark into every school art project. “They’re beautiful and they’re graceful is what I discovered early on,” he said.

Pat Bereskin, owner of Beréskin Gallery & Art Academy, worked with Buckles when he was a boy. Among projects he was involved with were the murals at Bettendorf Middle School.

Buckles, a certified diver, has observed Caribbean reef sharks up close during an excursion in the Bahamas. 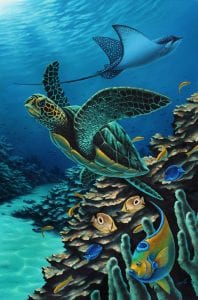 A large sea turtle floats through another work of Buckles.

He is outspoken in his opposition to the illegal fishing trade and a practice called shark finning, where fins are stripped from sharks and their bodies thrown back in the water. With no ability to swim effectively, they sink to the bottom of the ocean where they die or are eaten by predators.

“When you hear the statistics, 100 million sharks are killed every year, mostly for this practice,” he said in the release. “We’re supposed to be the stewards of resources we have,” and sharks are important to the entire ecosystem, he said.

He does ongoing design work for a nonprofit organization called Sharks4Kids, which offers free educational materials about sharks. His work in creating branding and communications campaigns for clients has brought him numerous awards.

Buckles and his wife, Karisa, and their children Amelia, 9, Charlie, 7, and Rosellen, 6, recently moved from Bettendorf to Waterloo, Iowa.

“I’ve always been blessed with people who have supported me along the way,” he said. “Whether it’s my parents, and now my family, as well as my art teachers. They were so instrumental in me finding a path in life in art.”

You can see Buckles’ work at www.brianbucklesartwork.com.