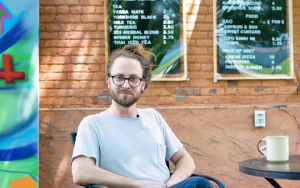 Benjamin: I was living in South China, this was 2006, when I started getting into booking and running a venue. I was doing that for around three years there when certain circumstances lead me to come back here. to my home town. I was enjoying it so much over there that I decided that I was going to do it here. I didn’t want to do anything else. I didn’t want to work for anyone. It was kind of like make this happen here, or just like move somewhere else. I hadn’t been here for almost a decade when I move back and researching venues and this type of scene here, I realized that it kind of didn’t exist. There was Mixtapes in East Moline at the time but they were sort of on their way out by the time I got back. Daytrotter was putting on shows in various venues around the cities. So yeah, I saw an opening for a legitimate venue that was working with a DIY ethos. In 2011 we opened this place and hit the ground running. I mean our first month we were open, the War on Drugs play here and then it just kept going.

E: What event in this space are you especially proud of?

B: I couldn’t say any one show.

E: But are there some that just came to mind right now?

B: Yeah. I think maybe this has to do with what we were talking about earlier with the international acts coming in, but the Touareg bands that we’ve had, the African bands, like Mdou Moctar and Les Filles de Illighadad. I’ve never seen these types of African bands coming to the Quad Cities. When they were on my stage it was like “Oh shit! this is really cool!” But that said, there have been so many shows that I’ve been really proud of and enjoyed on a spectator level.