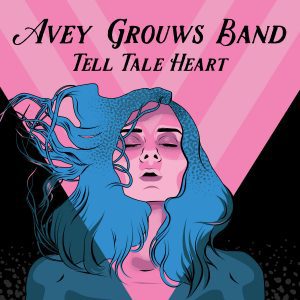 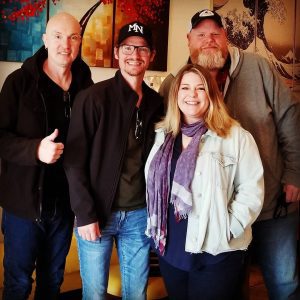 Wasner — whose previous credits include a Grammy win for engineering the Keb’ Mo’, Taj Mahal album, TajMo, and playing drums with Keb’ Mo’ and rhythm guitar for Robben Ford —  stated: “After spending two weeks straight in the studio with the Avey Grouws Band, I learned a couple things. The first week I learned that this band kicks ass. In the second week, I didn’t want our session to end. The hang and the music are infectious.”

Grouws’ powerfully expressive vocals and Avey’s ace guitar playing are complemented by their on-point bandmates. “I believe in this band more than I’ve believed in any other project,” Grouws says of the collaboration she considers the best musical experience of her life.
Grouws and Avey composed the Tell Tale Heart songs during the coronavirus pandemic. Many of the album’s lyrics respond directly to the international health crisis and political and social turmoil that engulfed 2020.
For more information, visit www.aveygrouwsband.com, www.instagram.com/aveygrouwsband and www.facebook.com/aveygrouwsband.

You can pre-order the Avey Grouws Band’s new album, “Tell Tale Heart” (out Sept. 24), at https://aveygrouwsband.bandcamp.com/album/tell-tale-heart.