As I Lay Dying, with Whitechapel, Shadow of Intent, & Brand of Sacrifice will rock The Rust Belt – East Moline, at 7 p.m. July 5!

Get your tickets here!

As I Lay Dying
Flames fuel rebirth. In the wake of the conflagration, future possibilities flourish out of the ashes. Reigniting a brotherhood dating back nearly two decades, As I Lay Dying rise together on their seventh full-length and debut for Nuclear Blast, the aptly titled Shaped By Fire. The San Diego quintet—Tim Lambesis [vocals], Jordan Mancino [drums], Phil Sgrosso [guitar], Nick Hipa [guitar], and Josh Gilbert [bass]—rally together and recharge the precise and pummeling metallic assault that transformed them into a turn-of-the-century heavy music phenomenon. These eleven tracks mark their first body of work together since 2012 and represent the dawn of a bold new era. The rebirth remains rooted in an impressive legacy. Since forming in 2000, the group sold over 1 million albums worldwide, garnered a 2008 GRAMMY® Award nomination in the category of “Best Metal Performance,” notched two Top 10 debuts on the Billboard Top 200, generated hundreds of millions of streams, sold out shows around the globe, and took home “Ultimate Metal God” at MTV2’s Music Awards in 2007.

Whitechapel
“To me, it was like the stars aligning for us to create our almost perfect record in regard to songwriting, vocal performance, the mix and master, and the artwork,” says guitarist Alex Wade. “We like to look at our albums as chapters of our career, and that is one chapter I will never forget. I think it really solidified that we can embrace a new sound, and if we execute it properly, then the fanbase is going to support and enjoy it.” In 2021, they return with that album’s successor, the mighty Kin, which is an even more dynamic and diverse collection, further advancing the band’s sound into new territory without losing sight of what brought them to this point. “I feel with every album, we learn what worked best on the last one and try to utilize that in our writing. Early in the writing, there was some discussion of the album being like ’The Valley’ part II, not literally called that, but in how the songs sound and flow through it. It’s very much a storytelling type record like ’The Valley’ was,” adds vocalist Phil Bozeman, “Musically, we just want to create what we vibe with at the given moment. We write music with how we feel and not what is expected of us, while lyrically the idea of continuing from the story of ’The Valley’ was always the goal.”

Shadow of Intent
The band name and lyrics were originally derived from lore from the Halo franchise and since then the band’s subject matter has become more dark and personal, focusing on the many evils in the world, whether myth or real-life events. Different genres of metal including death metal, black metal, symphonic metal, progressive metal, and metalcore are blended masterfully to create the unique sound that is Shadow of Intent.

Brand of Sacrifice
Since 2018, Toronto-based beasts of death metal darkness Brand of Sacrifice have been imprinting their mark on the heavy music scene with such force their army welcomes its burn. Dubbed “The Branded Ones,” the group’s fans joined and marched with them as they tore across the globe in support of debut EP The Interstice and LP statement God Hand which debuted at #20 on Billboard’s Heatseekers Albums Chart. Other highlights to a whirlwind cycle for God Hand included a slot on The Summer Slaughter Tour with Carnifex, Cattle Decapitation, The Faceless and Lorna Shore, a world tour with tech vets Rings of Saturn, plus a tour with fellow upcoming deathcore titans Shadow of Intent.   They’ve spread their wings for their sophomore LP ’LIFEBLOOD’ – the production is even more pummeling, which is exemplified by laser-sharp structures and a wide-gulf of dynamics. The album takes catchy to another level, with choruses comprising string orchestrations, synths and sound effects alongside bludgeoning breakdowns. It’s all too appropriate given the new album focuses on Berserk dark horse protagonist Guts, a lone wolf who faces demons both inside and out in a post-apocalypse world.   Fans often hear the show end with “Eclipse” and its closing chant of, “Welcome to the new age.” With LIFEBLOOD, it’s evident we’ve entered an even fresher one, and there’s no turning back. 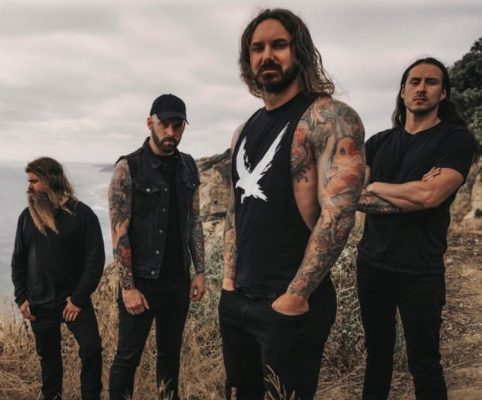