After receiving her bachelor’s and master’s degrees from WIU, and receiving her doctorate from the University of Chicago, Anderson began teaching at WIU in 1999. She taught anthropology and archeology courses, in addition to unique anthrozoology courses that emphasized the relationships between humans and animals. The course helped her receive a 2003 award from the Humane Society of the United States for Excellence in a New Animals and Society Course. 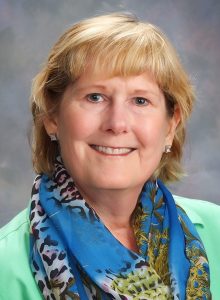 the placement of geoglyphs on open spaces on the WIU campus.

“I have known Dr. Pat Anderson since my days as a fellow faculty member residing in fourth floor Morgan Hall,” said WIU College of Arts and Sciences Dean Susan Martinelli-Fernandez. “I was always impressed with her optimism, her commitment to academic excellence, her student-centered approach to her classes, and her creativity, such as that expressed in her class project in 2017 of a ‘geoglyph,’ a large two – three acre design executed on the surface of the earth by moving soil, rocks or vegetation, created on Currens Field. Pat was a kind, compassionate colleague, and I, as well as many others, will miss her greatly.”

Anderson was proud of her work with her colleagues to build a face-to-face anthropology major, and later an online program, which was the first in the state and one of the first in the nation. As she prepared for her retirement, which was set to begin Aug. 1, she penned a tribute to her career for her department’s newsletter.

“From Mississippian temple towns to Maya pyramids with hieroglyphs inhabited by the descendants of those who created them, it has been an exciting career,” she wrote. “From ‘killer’ bees to venomous snakes, to tales of shape shifters and demons, to participating in an overnight Maya rain god ceremony, it held student interest. As a colleague I’m proud of our accomplishments; During my time at WIU I taught 12 different courses, including four new courses that I created. By learning to more humanely communicate with animals, I learned to better design my course syllabi and to better communicate with my human students. I love that my career has led me to continuously learn new approaches and new material to keep courses relevant and lively. I will miss my wonderful colleagues and students. I’m lucky to have held my dream job.”

Anderson was also well-respected in the avian world, owning numerous birds and attending conferences across the country.

Anderson is survived by her husband, Steven G. Monger.

Sean Leary
Sean Leary is an author, director, artist, musician, producer and entrepreneur who has been writing professionally since debuting at age 11 in the pages of the Comics Buyers Guide. An honors graduate of the University of Southern California masters program, he has written over 50 books including the best-sellers The Arimathean, Every Number is Lucky to Someone and We Are All Characters.
See More Articles From Sean Leary
Tagged: patricia andersonWestern Illinois UniversityWIU