Forty days before his wife Jen would turn 40, Ben Schrempf of Rock Island had a pretty big surprise waiting for her.

Jen Schrempf’s reaction when she saw all her surprise gifts on May 24, 2021.

Inspired by a video he saw last summer on TikTok, Schrempf for months enlisted family and friends to help get Jen 40 birthday presents. He hid them at his office – where he works in IT for Ruhl & Ruhl corporate in Davenport, until May 24th.

“Our daughter had a softball game that night and I was strategically late coming home from the gym so she would have to take her to softball,” Ben recalled Monday, when the TikTok video he made of Jen’s reaction surpassed one million views in two days. “I stopped home real quick and in a matter of, I mean just minutes, throwing it together with everything set up. We met at softball and the video was recorded after the softball game.”

Jen – a 5th-grade teacher at Rock Island’s Earl Hanson School – has two daughters with Ben: Madelyn, 12, and Bri, 10. In the video, she closes her eyes as she walks through the kitchen to see the dining room table covered with wrapped gifts – to be opened one a day until her 40th birthday on July 2.

The spread of birthday gifts, opened one day at a time over 40 days until July 2.

“Last summer, I started pretty much taking notes on anything she said she wanted,” Ben said. “Then starting in January, every paycheck, I picked up two or three things and in March I opened it up to family and friends and started to run out of ideas, and I thought it’d be cool to maybe involve family and friends. When I opened that up, that kind of got me all the way to over 40 gifts.”

He wanted to post the video on TikTok, since the idea originally came from there.

“You want to see a reaction and it turned out so well that like, I’m just going to throw this up there and maybe a 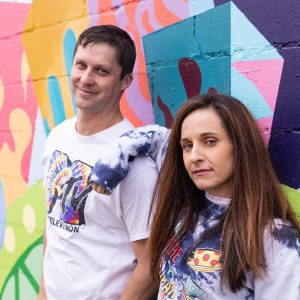 thousand people see it, and maybe it inspires like one person to do something like this,” Ben said, not realizing it would be so popular.

“I’m not out for followers or views or anything. I just wanted to inspire. I just wanted to maybe inspire another guy to do this for his wife,” he said. “You know, a lot of the comments were, my spouse would never do this for me, and if someone can be inspired by my post and seeing her, then that’s really all I wanted. But it kind of blew up over the weekend.”

The gifts ranged from an Apple Watch from her twin sister Dawn, to several gift cards, including a gift card to Starbucks and some socks – “you know, just real small stuff that she would never buy herself,” Ben said. 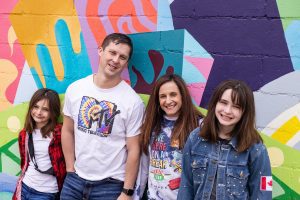 Ben and Jen Schrempf with daughters Bri, left, and Madelyn.

He also put together 40 Bingo balls in a roller that she and the kids spin every day to choose one, which determines which numbered gift to open.

Jen – who was moved to tears in the video – said Monday she was in shock.

“I didn’t know what was going on. It had kind of been a late night for our daughter’s softball game. So I was tired,” she recalled. “The first thing he said to me is like, you know it’s like 40 days to your 40th birthday and I was like, well that’s not really nice to point out.

“Then he made me close my eyes and then I saw the presents and I was honestly shocked that he did something so kind for me and that my family and friends then contributed to it as well,” Jen said. “I was just very overwhelmed, just like the amount of planning and time it would take to put it all together like that. 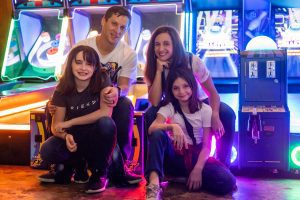 The Schrempfs with daughters Madelyn, left, and Bri.

“That’s probably what was so emotional for me – ‘cause I cried and it was just a kindness of everybody else that was shown toward me and I’m kind of just a low-key kind of person,” she said. Jen told Ben she was insistent he not throw a big 40th party for her, but wanted just a low-key celebration. “Turning 40 is just another number for me. I’m healthy and I’m alive and that’s really what I look at as far as age,” she said. “Age doesn’t bother me.”

Ben turned 40 last August, and they celebrated with a group of about 40 to 50 people outside at a bar in Rock Island.

“It was nice. I mean, considering it was during the pandemic and everything that was going on,” he said. “Things had lightened up a little bit. I had this idea sometime in July after she turned 39. I can’t mention it to anyone, including my kids and I don’t want to my kids to feel pressure to do something above and beyond for me. So, I had to keep it quiet for a few months before I started telling people.”

“Some of the gifts are just so fun. I got like a beer pong thing, and then I got very sweet letters,” Jen said. “I’ve gotten like shirts and clothes that I wanted. I got an Apple Watch, he got me everything that I really wanted. So it’s so fun. The girls and I look forward to it…We do it as a family every night. It’s amazing; I love it.”

As for her actual birthday, Ben said they’ll probably go out to dinner and do typical birthday stuff, honoring her request to not have a party. “I still have two weeks to see if I want to do anything greater,” he said. “Procrastination is my specialty.”

Jonathan Turner
Jonathan Turner has been covering the Quad-Cities arts scene for 25 years, first as a reporter with the Dispatch and Rock Island Argus, and then as a reporter with the Quad City Times. Jonathan is also an accomplished actor and musician who has been seen frequently on local theater stages, including the Bucktown Revue and Black Box Theatre.
See More Articles From Jonathan Turner
Tagged: 40 birthday presents40th birthdayben schrempfbirthday giftsearl hansen schooljen schrempfRock Islandtiktok