Six public sculptures in Bettendorf and four in Rock Island are in the process of being replaced with new ones. Each city has elected to keep one sculpture from last years’ selection for another year. Quad City Arts has facilitated the leasing and installation of public sculpture in the Quad Cities since 2002. The City of Rock Island has participated in the program, yearly, since 2007 and Bettendorf, since 2008. All of the sculptures are for sale and can be purchased by individuals, businesses or the city for permanent installation after June of the following year.

In Bettendorf, look for “Uncle Andy” on the hillside in Faye’s Field near the Bettendorf Public Library. Created by Paul Bobrowitz of Colgate, WI, “Uncle Andy” is everyone’s favorite uncle taking the kids for a walk in the park to enjoy nature.

At Martha’s Point on State Street and Riverdrive, notice “Windows” also by Paul Bobrowitz. “We all see things differently. ‘Windows’ is my representation of three divergent points of view through that window,” states Bobrowitz. He explained that his sculpture is especially relevant at this time in the world when people have differing opinions about everything going on.

At the entrance to Veteran’s Memorial Park, pedestrians, cyclists, and cars will all pass by “Triumph” by Ben Pierce of Cape Girardeau, MO who explains, “I take a minimalist approach to my designs; this sculpture is no exception. “Triumph” was created as part of a series of work where I challenged myself to create by limiting my design elements to only use two straight lines and one circle. Unintentionally this sculpture began to look like a person with their arms stretched out above them in a victorious pose- which is where I derived the title- “Triumph”. Note: Pierce has another sculpture on permanent display at the top of Faye’s Field.

artist David Zahn. “The human form has always been a major element in my work. Integrating images of people and blending them with abstract forms has been a long-lasting direction in my art. I strive to create a feeling of timelessness and a strong emotional element in each piece.”

On the plaza at the Waterfront Convention Center, viewers are encouraged to engage with “Talk, Talk, Smile” by Leslie Bruning of Council Bluffs, IA. Bruning explain that “TALK-TALK-SMILE is a street conversation that 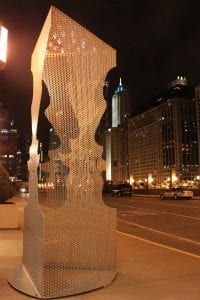 determines the quality of life on a neighborhood street. Neighbors need to converse with each other, and they can be most effective if they do it with a smile on their face.  The perforated steel creates a translucent quality that brings the faces and words in and out of focus and allows the viewers to see each other in the neighborhood through the sculpture. This encourages a sense of shared space on the street.” The meaning of this sculpture is has never been more important.

Coming soon to the Bettendorf Community Center will be “Seeking Shelter” by Andrew Arvanetes of Chicago. “My sculptures have always been object-oriented and narrative in nature. I attempt to achieve this connection with my audience by utilizing universal visual details.” This sculpture would be fun to make up a story about. Note: Andrew Arvanetes also created “Swoop” on permanent display in front of the Fire station on State Street, as well as a sculpture on the viewing deck behind the Isle Casino Hotel.

On display for another year is “Just Visiting” by Donald Horstman of Fenton, MO. “Just Visiting” is a flock of butterflies taking off in front of Ascentra Credit Union, on State Street.

In Rock Island, patrons to the Southwest branch library can enjoy “Awake” by Miki Lemieux. “Awake, refers to the “understory” of organic matter and life. This is essential to life; everything has an understory of that which came before. Fossils and time convert into fossil fuel.   New life sprouts in awareness from seed or egg. This delicate balance of birth, growth and transformation are cycles that maintain Earth. There are numerous micro-ecosystems all around us, in us, and a part of us. What flourishes and what does not, what evolves, what grows extinct? Life is in constant flux and continual renewal. 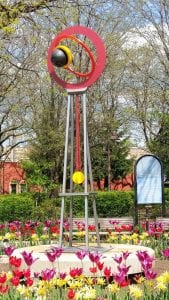 Near the Genesius Stage in Lincoln Park, picnickers will discover “Reaching to the Moon” by Tim Frye, of Shumway, IL. Frye explains, “As humans, our never-ending dreams consist of growing and always reaching upward. It is interesting that nature too moves in this way.  This sculpture was designed to have kinetic motion.  The upper section sways gently in the wind.”

Those visiting Longview Park will be delighted to find “Spring Fling” by Donald Horstman, of Fenton, MO. “Spring is the time for seeds to be blown in the wind.”

Just outside Longview Park at the intersection known as “Five Points” will be “Moon shadow” by Peter N. Gray of Chicago. “Moon Shadow was inspired by last year’s full eclipse of the moon and the orbits of the moon and earth.  The moon pendulum (fixed on the sculpture) refers to the phases of the moon.” (Expected soon, this sculpture was delayed due to rioting and street closures in Chicago.)

“Growing Up” by Ben Pierce, will remain in front of the Centennial Bridge Visitor’s Center for another year. “This sculpture pays respect to my family history and lineage of bricklayers. My father is a 3rd generation bricklayer and I spent a lot of time as a kid on the jobsite. I would play in sand piles that were used to mix with the Portland cement and water to make the mortar.  I remember climbing up on the scaffolding and watching my dad as he laid bricks. Using or mimicking a plant-like form, to show growth. Placing the bricks inside a circular shape on a form that is largely angular highlights the brick to showcase their value. As the form grows, the bricks are an integral part- just like in my own growth and childhood,” explains Pierce. 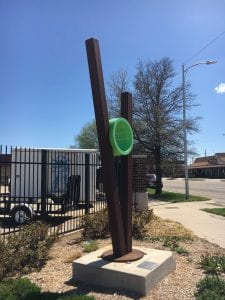 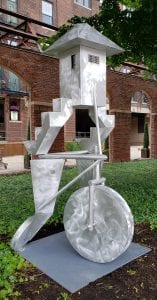 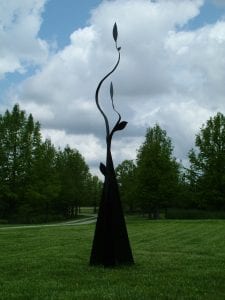 Sean Leary
Sean Leary is an author, director, artist, musician, producer and entrepreneur who has been writing professionally since debuting at age 11 in the pages of the Comics Buyers Guide. An honors graduate of the University of Southern California masters program, he has written over 50 books including the best-sellers The Arimathean, Every Number is Lucky to Someone and We Are All Characters.
See More Articles From Sean Leary
Tagged: andrew arvanetesartartistsbettendorf community centerDavid ZahnFaye’s Fieldleslie bruninglocal artistspaul bobrowitzQuad City ArtssculpturesWaterfront Convention Center