Bishop Hill hosted a unique live Chautauqua festival on Aug. 22, but due to state rules, they limited attendance to 50 people and quickly sold out. So the Bishop Hill Heritage Association is working with the Butterworth Center and Deere-Wiman House to present a virtual Chautauqua this week.

“History in Person: A Virtual Chautauqua Festival” will be available free on Tuesday through Thursday, featuring three nights of historic portrayals, music and conversations with noted living history scholars and performers. The event is hosted online but pre-registration is required at historyinperson.org.

“Imagine bringing the world’s writers, thinkers, scientists, and emancipators into your living room,” said Brian “Fox” Ellis, a popular area storyteller and executive producer of the online Chautauqua Festival. “With many of the live Chautauqua performances postponed due to Covid-19, we are working together to create an immersive on-line experience with music, historic portrayals and conversations to invite audiences to engage with living history at home.”

The online festival kicks off on Tuesday at 6:30 p.m. with music from Heartland Connections. At 7 p.m. is “Literature: A Revolution of Words,” an exploration of how great literature has changed the world. On the 100th anniversary of women winning the right to vote, you can hear  from two generations of suffragists and writers — Julia Ward Howe (1819-1910), portrayed by Jessica Miller, and Caroline Nichols Churchill (1833-1926), portrayed by Liesl Jensen. 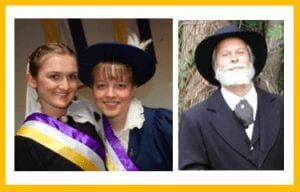 Then Brian “Fox” Ellis will bring to life the old gray-bearded poet Walt Whitman, telling tales of the Civil War, his relationship with Lincoln and the stories behind his famous poems, “Leaves of Grass,” followed by an interactive Q & A with the performers. The evening is sponsored by the Bishop Hill Heritage Association.

On Wednesday, the program will look at “Science: The Legacy of Discovery,” exploring how science challenges us to rethink our world. Sponsored by The Butterworth Foundation, in partnership with PBS affiliate WQPT, you can first watch a brief preview of Ken Burns’ new documentary “The Gene” at 6:30 p.m.

“The Gene: An Intimate History” is a new four-hour documentary from Ken Burns and Barak Goodman, adapted from the award-winning book of the same name by Dr. Siddhartha Mukherjee. The series tells the story of the rapid evolution of genetic science.

Then at 7 p.m., Charles Darwin (played by Ellis) takes the stage to regale the audience with tales of his travels and travails as he circumnavigated the globe on HMS Beagle, equal parts stand-up comedy and a fascinating look at the scientific process.

At 8 p.m., Susan Marie Frontczak joins the conversation online, first with clips from her critically acclaimed digital theater production “Humanity Needs Dreamers: A Visit With Marie Curie,” followed by an interactive engaging with Fox on the importance of bringing science to the stage through historic portrayals. 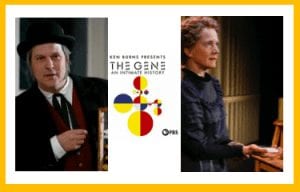 On Thursday, music by Heartland Connections will open the program at 6:30, followed by “Emancipation: The Promise of Freedom,” an interactive conversation on what freedom meant in Colonial America and what it means to us today.

With two unique perspectives performed live online, we first will hear from Francis Tasker Carter, Colonial America’s Aristocracy, and the wife of a founding father, who freed more than 500 slaves, the largest single emancipation up until the Civil War.

Then we hear this same story as told by Sarah Cooper, a freed woman whose freedom was snarled in a legal challenge. Darci Tucker and Sheila Arnold, who portray these women, have both worked at Colonial Williamsburg and now tour the country bringing “her-story” to life as independent artists. 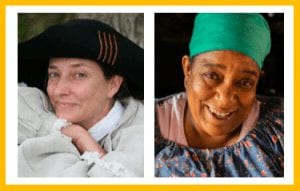 The Jacksonville, Illinois Convention and Visitors’ Bureau, home of the Prairieland Chautauqua, is sponsoring this evening.

“If you are intrigued by the intricacies of civil discourse and sometimes wish you could ask questions of notable people from our past, then join our conversation where history is invited to talk back.” Ellis said.

“History In Person: A Virtual Chautauqua Festival” is free to register online with donations as optional, at historyinperson.org.

The event is produced by Fox Tales International and co-produced by Live Story Productions with sponsorship by Heartland Connections, The Bishop Hill Heritage Association, The Wiliam Butterworth Foundation, WQPT, Jacksonville Convention and Visitors’ Bureau and STEM on Stage.

Jonathan Turner
Jonathan Turner has been covering the Quad-Cities arts scene for 25 years, first as a reporter with the Dispatch and Rock Island Argus, and then as a reporter with the Quad City Times. Jonathan is also an accomplished actor and musician who has been seen frequently on local theater stages, including the Bucktown Revue and Black Box Theatre.
See More Articles From Jonathan Turner
Tagged: Bishop Hillchautauqua festivallocal historylocal theaterquadcities historyQuadCities theater