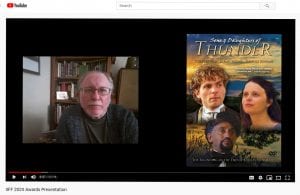 “Sons & Daughters of Thunder” is continuing to make noise throughout the Iowa Film Awards scene!

The movie, created by Kelly and Tammy Rundle, won a Critic’s Choice Award at the 2020 Iowa Independent Film Festival tonight. The awards were announced during an online ceremony.

“Thank you to the festival, and particularly to festival official Terry Harrison, for choosing “Thunder”!” Kelly Rundle said in a Facebook post.

Congratulations to the Rundles, and all involved with the film, from QuadCities.com!

Sean Leary
Sean Leary is an author, director, artist, musician, producer and entrepreneur who has been writing professionally since debuting at age 11 in the pages of the Comics Buyers Guide. An honors graduate of the University of Southern California masters program, he has written over 50 books including the best-sellers The Arimathean, Every Number is Lucky to Someone and We Are All Characters.
See More Articles From Sean Leary
Tagged: iowa film awardsKelly Rundlelocal filmmakersquadcities filmmakersquadcities filmssons and daughters of thunderTammy Rundle