The outstanding “Six Dance Lessons in Six Weeks” at Playcrafters shows us the essence of excellent live theater. Just two actors – with lots of costume changes, a varied musical soundtrack and dance styles – responsible for drawing and holding our attention for an entire story of two very different, colorful, strong-willed characters. 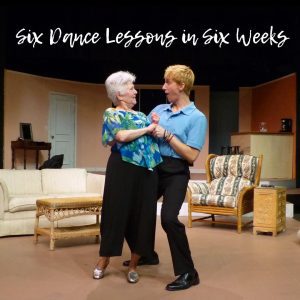 Playcrafters veterans Stephanie Naab and Adam Cerny were originally supposed to do the show in July 2020.

But “straight” play is somewhat of a misnomer for Richard Alfieri’s razor-sharp, witty and barb-filled script – since Michael is flamboyantly, hysterically gay, following a brief sojourn in the closet as he hides his true identity at first from Lily. But in Cerny’s delightful, life-affirming portrayal, “gay” doesn’t mean just homosexual. It recalls its old-time definition as happy, uninhibited, as the Bettendorf actor works relentlessly to cheer up Moline’s Naab as the dour, tentative Lily, who also skirts the truth as she initially relates her marital situation.

The white-haired, 70-ish retired teacher has hired the literally colorful, jaded Michael to give her dance lessons in her spacious condo in St. Petersburg Beach, Florida, with a drop-dead gorgeous 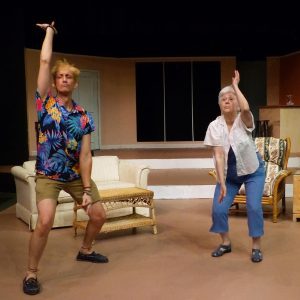 ocean view. Antagonism between an outlandish gay man and the conservative wife of a Southern Baptist minister gradually gives way to profound compatibility as they swing dance, tango, foxtrot, and cha-cha while sharing quips, insults, forgiveness, secrets and intimacies along with taking dance steps in their progressive, deeply meaningful relationship.

The play had its premiere in 2001 in Los Angeles, with Uta Hagen and David Hyde Pierce, and its 2003 Broadway premiere featured Polly Bergen and Mark Hamill. “Six Dance Lessons” – which is neatly divided into one scene per lesson – has been translated into 14 languages and has been produced in 24 countries across the globe.

By the final lesson, Lily shares with Michael her most closely guarded secret, and he shares with her his greatest gifts — loyalty and compassion. A poignant comedy with music and dance, the play also addresses the serious issues of ageism and intolerance.

For Cerny, who should really be a national star already (he often gives off a Dan Levy vibe), this is his third two-person show – after “The Woman in Black” at Playcrafters with Andy Curtiss and “Thrill Me: The Leopold & Loeb Story” at the Circa ‘21 Speakeasy with Tom Taylor. Due to the strength of his personality, he has no problem commanding attention and dominating a stage. He has such a magnetic presence, whether it’s drama or comedy, he is so thrilling and captivating to watch.

“Personally – I love the challenge of having two actors tell a story on stage,” Cerny said before the “Six Dance Lessons” run. “It’s a real-life immersive exercise in trust. Trust for yourself, the other actor, the space you share, the moments you create together, etc… I’m lucky that I’ve 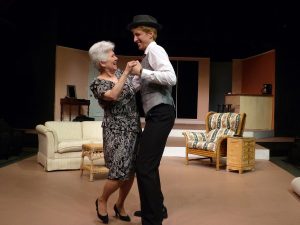 Naab and Cerny clearly have fun cutting a rug (after the rug is moved off the Playcrafters stage).

had the opportunity to work with amazingly talented artists…There’s a certain intimacy in 2-person shows + it’s most rewarding to create that space with my fellow storyteller.”

He has had a great time working with Playcrafters, since the barn-burning role of psychotic villain Clifford Anderson in “Deathtrap” in 2016, directed by Patti Flaherty (OMG, it was sooooo good). Cerny was Arthur Kipps in “The Woman in Black” in 2017, Guy in “Some Girl(s)” in 2018, Dale Wiston in “Something Intangible,” Leo in “4000 Miles,” and Dr. Flemming in “Prescription: Murder,” all in 2019. 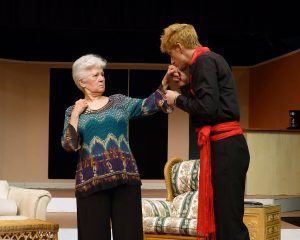 Adam Cerny looks the part during the tango scene with Stephanie Naab.

“Six Dance Lessons” was originally supposed to start rehearsals in May 2020 for a July 2020 run, but you know the rest. Covid originally bumped it to the fall of 2020, then forward a full year.

For Stephanie Naab, who is Playcrafters royalty with spouse Tom, this is actually her debut as an actor in a two-person show, after directing “The Woman in Black” the first time Playcrafters produced it. “It was just two actors and presented a number of directorial challenges. The major challenge for an actor is the sheer number of lines to memorize, which is especially hard at my age,” she said before this show. “Gray hair makes you lose memory cells!”

Stephanie and Tom have worked with Playcrafters since 1971. “We’ve acted, directed, produced, and worked backstage in every capacity, along with serving as board members,” she said, adding she worked full-time as Playcrafters’ executive director from 1993 to 1998.

The new production presents extra challenges, since the two actors not only have to memorize so many lines, but also the choreography. The Saturday night performance I saw was an extra drain on the pair, since they had already done a matinee show earlier in the day for over 100 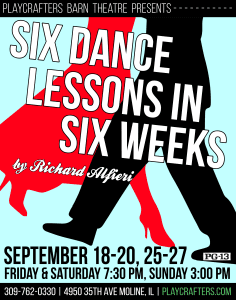 Plus 60 members, who had a hoot at the hoot-filled proceedings.

But the energy and commitment of both actors did not seem to flag in the least. The bountifully entertaining play is a true study in contrasts – Cerny, a frank, wide-open book, like a giddy dog eager for their owner’s affection, while Naab is reticent, wary, doubting and reticent to show her vulnerabilities, which are very much there below the surface. Early on, Michael says, “You have to get used to my sense of humor.” Lily blithely, sarcastically retorts, “Do I?”

It’s obviously going to take a lot of work for these to meet in the middle and truly understand each other, and of course, they become very close by the play’s end, after many explosive arguments, apologies, recriminations, confessions, and sharing of the wondrous, unspoken bond of dance.

At the beginning of each lesson, Michael gives Lily a brief recap of the history of each dance, including the intimate, sexual tango, which offers a socially acceptable way of touching – “undiluted musical foreplay,” Cerny explains. The fourth scene with the foxtrot shows an “excuse for pressing your groin against someone without getting arrested,” he says. Exactly – and it’s a leisure, lovely dance.

A contemporary dance to the Beach Boys in the second act is a riot, partly due to Cerny’s gleefully loud shirt and khaki shorts, and the fun both performers exude. A couple of the wonderfully glib lines he gets are reassuring Lily about the pain and routine of a loveless marriage (“That’s what you get for marrying outside of your gender”) and a brief affair with a married man (“I was like that yogurt – fruit on the bottom”).

The show is very relatable when talking about unseen characters (the nosy downstairs neighbor, the difficult relationships, dealing with the trauma of death), and many real unseen characters at Playcrafters helped contribute to its strong success.

“Six Dance Lessons” doesn’t rely on the impressive talents of its actors, but the many hours and weeks of work from a 21-person crew, led by Kingry – who not only directed, but designed the elegant, upscale, peach-colored set, operated the sound and light board, helped with 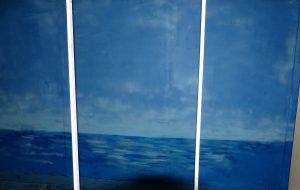 costumes and did publicity photos.

A good bit of the magic created on stage was produced by the beautiful backdrop of the sea and sky, and lit to tremendous effect to reflect sunsets – particularly in the “Try to Remember” waltz, and closing fadeout with “What a Wonderful World.” Those pink and orange highlights are not in the paint, but in the lights.

The mural artist here is Leart Damoni, who is from Pristina, Kosovo. He’s participating in the 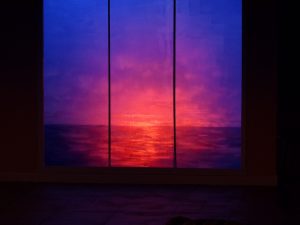 The sunset scene at the end of the show.

YES (Youth Exchange and Study) and IRIS (Iowa Resource for International Service) programs, living with a host family in Davenport and attending Davenport West as a junior. Leart recently turned 17, but he is already an accomplished artist. Kingry said.

The tech director Phil Cathoir (Bettendorf) has strong contacts within the exchange student program, having been involved for five years now, serving as a host for four of those years, she noted. Two students staying with him now, Ventsislav Ivanov (from Vidin, Bulgaria) and 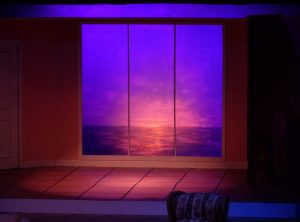 The lighting for the waltz scene in the first act.

Deekshith Alluri (from Neelwai, India) are both 18-year-old seniors at Bettendorf High. Both worked on the set building and painting crew for the show, and additionally led to finding Leart and five additional foreign exchange students who worked on the set.

So it certainly takes a global village to raise a play, and this is one that’s an unforgettable keepsake. “Six Dance Lessons” shows our common humanity – that the social bonds we share are far stronger than our differences (whether age, gender, sexual, racial or ethnic). We’re all people, just wanting to be loved and accepted for who we are, and make the most of our time on this little blue planet.

And we are all united by music, dance, and simple emotion. Michael, in the play, nails it when he explains dance as expressing our soul. And Playcrafters has it in abundance.

The final weekend has performances at 7:30 p.m. Friday and Saturday, and 3 p.m. Sunday. Tickets are $15; with $13 seats for military and seniors (62+), available at playcrafters.com.

Jonathan Turner
Jonathan Turner has been covering the Quad-Cities arts scene for 25 years, first as a reporter with the Dispatch and Rock Island Argus, and then as a reporter with the Quad City Times. Jonathan is also an accomplished actor and musician who has been seen frequently on local theater stages, including the Bucktown Revue and Black Box Theatre.
See More Articles From Jonathan Turner
Tagged: Adam CernyPlaycrafters Barn Theaterplaycrafters presents six dance lessons in six weekssix dance lessons in six weeksStephanie Naab