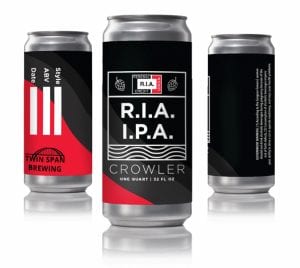 You can get cans of the new R.I.A. IPA, and $2 from each will go to Honor Flight of the Quad Cities.

The R.I.A. Federal Credit Union – which today is celebrating the opening of its new branch at the booming BettPlex – is partnering with a brewery there to help fund the Honor Flight of the Quad Cities (HFQC).

The credit union is holding a ribbon-cutting for its BettPlex location at 3 p.m. Feb. 11, at 4880 Forest Grove Dr., Bettendorf. This location originally opened in July 2020 and has been in operation since then. The credit union had wanted to celebrate the opening of this state-of-the-art facility last year with a ribbon-cutting ceremony, but at that time, the Covid-19 pandemic reached a stage where such an event was not advised.

The financial institution has commissioned a special label R.I.A. beer, from Twin Span Brewing at the BettPlex, and a donation of $2 from every can/pint will go to the Honor Flight of the Quad Cities.

“The new beer is called the R.I.A. I.P.A. and it is an India Pale Ale,” said Jim Watts, President/CEO at R.I.A. Federal Credit Union. This beer is a hazy IPA blended with blood orange puree for a bold fruity flavor with low bitterness. 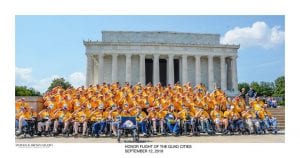 A group of Quad-Cities veterans on an Honor Flight trip to Washington, D.C. in September 2019.

“We’re happy to show support for both a local cause and a local business with this project,” Watts said. “Honor Flight of the Quad Cities recognizes veteran heroes of our area, and Twin Span Brewing is a fun, friendly place that offers great food and exceptional beverages – both of which can be ordered online.”

The HFQC is the Quad-Cities chapter of the Honor Flight Network, which works to fly America’s veterans to Washington, D.C., so they can visit the memorials that honor their sacrifices.

Top priority is given to World War II and Korean War era veterans, or any veterans with a terminal illness. Veterans who live within 75 miles of the Quad-Cities are encouraged to apply for HFQC flights. Every flight departs from the Quad City International Airport, flies directly to Washington, D.C., and returns the same evening. The HFQC operates on donations from organizations and individuals. 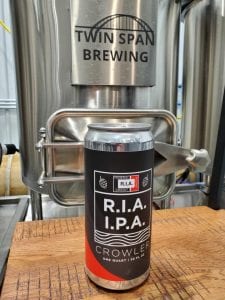 Twin Span Brewing at the BettPlex has crowlers available of its new IPA.

Eligible veterans who’d like to apply for the trip, as well as interested donors and volunteers, are encouraged to visit the HFQC Application Forms page at http://honorflightqc.org/application-forms and download an application to fill out and mail in. HFQC requests that no calls be made to check on application status, once the paperwork has been sent.

Applicants are called by HFQC volunteers four to eight weeks prior to the set honor flight dates, to let them know they have been selected to attend the next scheduled flight. All applications are dated in the order they are received. To find out more about the HFQC, visit https://honorflightqc.org. 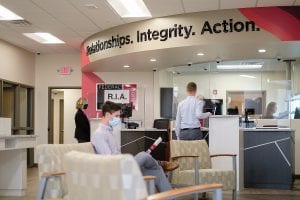 The new R.I.A. Federal Credit Union at the BettPlex has been open since July 2020.

Twin Span Brewing is located at 6776 Championship Drive, Bettendorf. You can stop in and pick up a crowler of R.I.A. I.P.A. and dinner for the family, call 563-526-4677 for takeout or visit www.twinspanbrewing.com to order online.

R.I.A. Federal Credit Union is a progressive, member-owned credit union. Its  purpose is to provide the financial tools and expertise to members in order for them to achieve their financial goals and live their best lives.

You can also visit the R.I.A. Federal Credit Union on Facebook at https://www.facebook.com/riafcu.