New Cambridge Art Gallery a Light After Much Darkness

After so many shutdowns, economic devastation, and death caused by the Covid-19 pandemic, there’s something new and life-affirming opening in the Quad-Cities art scene.

The Excelsior Studio and Galleria – owned by self-employed artist Melody Sloat, and her husband Jacob – will open Friday in a former antique shop at 13013 N. 700th Ave. (Route 19), in Cambridge, Ill., 40 minutes southeast of Moline. The couple bought the historic building, and did much clearing, repairs and renovations in preparation to open. (For more information, check out their Facebook page.) 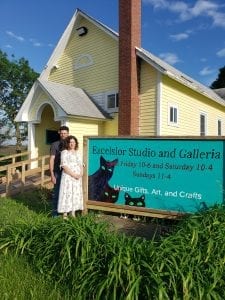 “We fell in love with this building and at first it was just gonna be me and my husband, but when we started taking things apart, the space was really huge.”

“I got the idea of adding some of my friends, doing consignment art with them,” she said.

Sloat, 43, and her spouse moved from Moline five years ago; her husband Jacob is a Cambridge native, and they have two sons, ages 22 and 19. Jacob works for Seither & Cherry in Davenport, an industrial construction company.

She previously worked for Von Maur 12 years at NorthPark and SouthPark malls in several departments, last as a floor manager. Sloat is a self-taught artist, focusing on acrylics and oil paints, and also makes soaps.

“I have always loved art, theater and music. It’s something I’ve always dabbled in. But my husband, he actually saw one of my doodles and encouraged me to do more of it…It brings me great joy.”

“An art oasis in the cornfields”

The 1,400-square-foot Cambridge building – which Sloat calls “an art oasis in the cornfields” – was last operated as an antique shop, but was vacant several years. The original building housed a 19th-century one-room school (called Excelsior), with the back section added on in the 1940s, that was a one-room school (Mount Pleasant School) from right outside Bishop Hill.

She’s displayed her art in Geneseo, a gallery in Bellevue, Iowa, and at the Bishop Hill Creative Commons, where artists paid monthly rent, and the Commons took an 8-percent commission on sales. At Excelsior, they won’t charge artists a fee, but will take a 25-percent commission of sales.

Sloat will start showing work from 32 area artists, with a lot of variety. Including her soaps, there is stained glass, mosaics, ceramics, fiber arts, paintings, rocks, vinyl records and books.

Carolyn Krueger of Rock Island, who will sell some of her pottery there, said: “It’s super cute with an eclectic variety of artists. Happy to be a part of a new art space!” 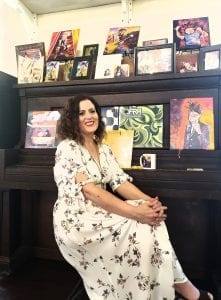 Sloat planned to open in early April, until coronavirus outbreak intervened. Customers at the gallery will be required to wear a face mask.

“We’re taking precautions, we’re only gonna let 10 to 15 people in at a time. We’ve got hand sanitizer and stuff to wipe things down. I think we’ll be OK.”

She’s showed her work in Geneseo, Bellevue, Iowa, and at Bishop Hill Creative Commons, near Cambridge.

“I didn’t want to move to Cambridge because it’s such a small town; I didn’t want to be away from everything. But I have fallen in love with the area,” she said. “It’s full of just inspiration. We have concerts all around us and there’s lots of artists here. I love the quietness and the small-town living.”

Of the gallery building, Sloat said: “It was kind of a mess when we took it over, but we loved the idea of using these historic buildings. We’ve been working on it every single day since we bought it, trying to get it ready. And it still needs a lot of work.”

The basement (that was filled with garbage) has been cleared out, for her husband’s woodshop and her paint studio, and future space for art classes (likely next year).

“We didn’t want to see it torn down,” Sloat said, noting her husband did a lot of the repair and renovations. They have put in about $50,000 so far for the building purchase and renovations.

“I’m one of those weird people that’s not really afraid,” she said of opening during this public-health crisis. “I was more afraid that we weren’t able to open our doors. It’s gotten to the point, I didn’t know how we were gonna pay our bills because when we bought the building, I dipped into my life savings, so we wouldn’t have any big loans or anything to pay for everything.”

“We were very passionate about what we were doing,” Sloat said. They planned to have a private event at the end of March, and open in April to the public, which couldn’t happen. 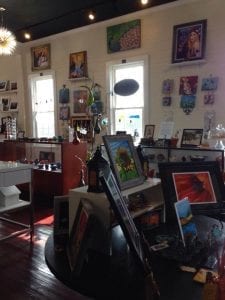 “I got just a little bit stressed about it,” she said. Though technically just open on weekends, people can come in by appointment during the week. “I know that there are still people that are afraid to shop, if there’s groups of people,” Sloat said. “I figured, if I opened by appointment during the week, they could have more of an intimate, special experience. They wouldn’t have the other people around, if that made them feel safer.”

They already have had people purchasing pieces by curbside pickup, since the last weekend of April.

Reveling in sources of inspiration

Her Cambridge friend John Taylor – who’s hosted hundreds of concerts at his house and organized summer concerts in Galva – has inspired her. Sloat used to do art sales in her front yard during city-wide yard sales. She did a children’s class in her yard, and had such a great response, she planned to do more. The community center let her use space to do paint classes Saturday mornings.

“I kinda wanted to have my own space to teach,” she said of the need for Excelsior.

Farmers have introduced themselves as their neighbors, but everybody’s spaced very far apart. “It’s beautiful cornfields and I love watching all the seasons, when they’re plowing, when things are starting to grow,” Sloat said. “Even in the winter, with the snow scenes, it’s just beautiful.

“I like to say the windmills, it almost sounds like waves crashing on the beach,” she said. “There’s hummingbirds out here; it’s just very peaceful. You can fear tree frogs chirping.”

Sloat said the natural beauty inspires her artistically as well. “I’m looking forward to sitting outside and painting,” she said.

The gallery will be open Fridays 10 a.m. to 6 p.m., Saturdays 10-4, and Sundays 11-4, with weekday hours by appointment. For more information, contact excelsiorstudioandgalleria@gmail.com.

Jonathan Turner
Jonathan Turner has been covering the Quad-Cities arts scene for 25 years, first as a reporter with the Dispatch and Rock Island Argus, and then as a reporter with the Quad City Times. Jonathan is also an accomplished actor and musician who has been seen frequently on local theater stages, including the Bucktown Revue and Black Box Theatre.
See More Articles From Jonathan Turner
Tagged: art galleriesCambridgeexcelsior studio and gallerygalvajacob and melody sloatjacob sloatjohn taylorlocal art galleriesmelody sloat