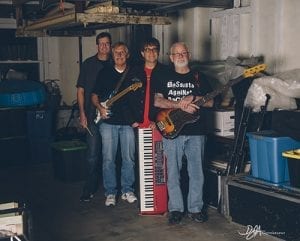 Crusin’, a Quad-Cities area band featuring luminary Max Allan Collins, is among the inductees into this year’s class for the Iowa Rock ‘n Roll Hall of Fame.

The Iowa Rock ‘n Roll Music Association is honored to be able to recognize Iowa artists with induction into the Iowa Rock ‘n Roll Hall of Fame and help retain Iowa’s musical legacy. Since incorporation, over 320 entities have had the honor of being inducted. Categories include Bands, Individual Artists, DJs, Media Representatives,  Venues, Ballrooms, Border Bands, Women Who Rock, Support People, Out of State Artists, and Lifetime Achievement Awards.

Inductees must have a minimum of 25 years’ experience in the industry and have made a significant impact on Iowa’s rock ‘n roll music scene. Many other factors are taken into account some of which include influence on other artists, length of career, level of activity, amount of regional and national tours, success of recordings, and current impact in Iowa music today.

Festivities for the 2018 Iowa Rock ‘n Roll Hall of Fame Inductions will take place Sept. 1-2 in and around Arnolds Park, IA. Tickets will be available for the general public March 1. Events include a Meet & Greet, Awards Ceremony, Iowa  Rocks Talent Finals (a youth music competition that allows the winners to participate in the Hall of Fame Concert), a Sunday Breakfast, and the Induction Concert (featuring performances by Inductee bands and individual Inductees).

The Iowa Rock ‘n Roll Music Association is a 501(c)(3) nonprofit organization whose mission is to preserve the legacy of rock ‘n roll music in Iowa by honoring achievements, educating youth and inspiring artists. For more information see www.iowarocknroll.com.

Sean Leary
Sean Leary is an author, director, artist, musician, producer and entrepreneur who has been writing professionally since debuting at age 11 in the pages of the Comics Buyers Guide. An honors graduate of the University of Southern California masters program, he has written over 50 books including the best-sellers The Arimathean, Every Number is Lucky to Someone and We Are All Characters.
See More Articles From Sean Leary
Tagged: CrusinIowa Rock and Roll Hall of FameMax Allan CollinsMax Collins