Sean Leary July 11th, 2018 Local Share:
The Genesius Guild will present “The Merchant of Venice,” opening on Saturday, July 14 at 8 p.m. in Lincoln Park, Rock Island, IL. The production will also be performed Sunday, July 15 and the following weekend, July 21 and July 22 at 8 p.m. All performances are free and open to the public. 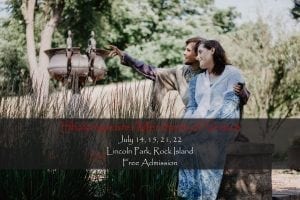 “The Merchant of Venice” is a play often studied in high school and college, but rarely performed onstage in the United States. The script includes some challenging content, but its powerful message about how humans treat people from different backgrounds remains highly relevant today. While Shylock is the villain of the show, Shakespeare took pains to depict him as a sympathetic figure who is driven to his actions by the mistreatment he receives at the hands of the other characters.
“The Merchant of Venice” is one of Shakespeare’s most famous, controversial, and fascinating shows. It represents a highly nuanced piece of subversive writing, as Shakespeare masks a blistering critique of Christianity’s treatment of the Jews behind his use of the stereotypes about Jews that were commonplace in Elizabethan England. Join us as we explore difficult themes of how humans treat those who they define as being “different.”

Sean Leary
Sean Leary is an author, director, artist, musician, producer and entrepreneur who has been writing professionally since debuting at age 11 in the pages of the Comics Buyers Guide. An honors graduate of the University of Southern California masters program, he has written over 50 books including the best-sellers The Arimathean, Every Number is Lucky to Someone and We Are All Characters.
See More Articles From Sean Leary
Tagged: Don WootenGenesius GuildLincoln Parklocal theaterMerchant of VeniceRock IslandShakespeare