Farewell, Blue Cat, You Were Beloved

Through murky magnificent memories of countless theater after-parties, lonely nights of last calls, the rushes of love and infatuation, passionate kisses and warm hands held, a very public breakup at the bar, a very public makeup off in a corner booth upstairs, huge smiles and laughs, big embraces from friends, solitary lunches with a notebook and a pen, business meetings and birthday celebrations, late nights and early mornings, and even a baby shower, the Blue Cat has been the setting for a large portion of my adult life, as well as the lives of many others. 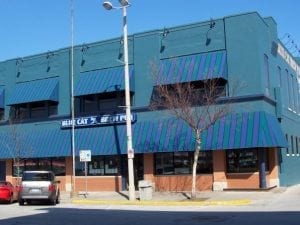 When the Cat closed its doors Aug. 31, it wasn’t just shuttering up the portals on a pub, it was turning the lights out on an era.

For many Quad-Citians, especially those in the creative community, the Blue Cat was far more than a restaurant, it was a family, a place to go where you felt at home, especially during the time the inimitable and wonderful Dr. Bob Murdoch was behind the bar.

It also didn’t have an atmosphere like anywhere else.

The Blue Cat was always unique. Even when brew pubs began to sprout faster than hipsters’ beards, it was one of a kind, with a vibe, a menu and a drink selection that defined its era and a warmth to a certain enclave of the local arts tribe that was distinct to any local hangout. 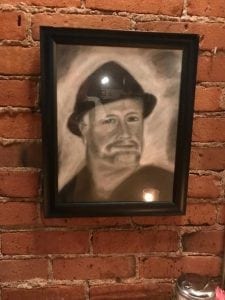 In any given time in its heyday, you could go into the Blue Cat and rub shoulders with mayors and politicians, policemen and artists, college students and university professors, and, of course, a riot of theater types. When I ran my theater company, My Verona Productions, out of the Speakeasy from 2003-2008, it was our hangout for cast and crew, and practically every weekend and many weeknights, we darkened its doorstep and drained its glasses. We were far from the only ones. Circa ’21, the Speakeasy, Genesius Guild, Prenzie Players and Comedy Sportz folks were likewise regulars, and after My Verona folded and from its ashes sprang the Harrison Hilltop and District Theaters, those casts likewise made the Cat their post-show home.

It had food like no other spot in the area. The soups were phenomenal. The meatloaf. The burgers. The Mediterranean mélange. The spinach jalapeno dip. The catfish. The Dixieland. The Scotch egg. Over the years I pretty much had everything on the menu, as well as the majority of the intriguing specials. It was all ambitious, all delicious. The beers were likewise a treat, from the Wigged Pig to the Big Bad Dog to the Coriander and Orange.

But it wasn’t just the potables that made the place memorable. It was the people. The Blue Cat tended to keep the same tenders and waitstaff for a long time, and they were friends, they were people you got to know, chatted with, traded quips and stories with, and always greeted happily. The environment was just 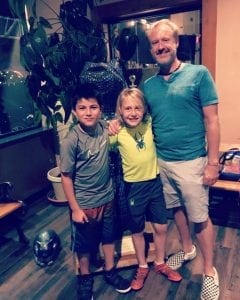 like that. It wasn’t terribly cliquey, it wasn’t banal or mundane, it was colorful and fun. Pretty much anyone could walk into Blue Cat and feel welcome.

It was my favorite restaurant and pub in the area, and God, and the waitstaff and bartenders, know that I certainly spent a great amount of time there, and I’ll most certainly miss it.

Still, when the end came, it wasn’t shocking as much as it was greeted with melancholy resignation. Dan and Martha were, understandably, looking to step away from the grueling pace, and so, to the surprise of many, decided to put the spot up on the market. The trio of John Timmer, Shane Scott and Jon McAtee, owners of the new Backyard Bowl and Abides Bar in Milan, leapt at the chance to own a piece of local history.

The restaurant business is notoriously fickle. Most places close within a year. Two or three years and you’ve done pretty well, five and you’re in the vast minority, beyond that, and you’ve really hit on something special. Twenty-four years? That’s pretty amazing. 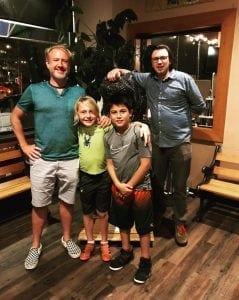 faith it’s going to be cool.

But it’ll still be a little bittersweet to walk in those doors for the first time and not have it be the Blue Cat.

Just as it was melancholy to walk out those doors the last time, under the bright neon Blue Cat sign.

I was there the last night they were open, until just a few hours before close. I brought my ten-year-old son, Jackson, with me. When I first visited the Blue Cat, I was in my early 20s, and God knows I wasn’t thinking at all about ever being in that same spot with a child of my own at that point.

But time moves on, goes forward, and everything evolves.

The first time I walked through those doors, I walked in with new friends, people from the newspaper job I’d just started, as I stood on the precipice of a new life.

The last time, I walked out with my best friend, my son, happy that I’d gotten to share this with him, and happy that he was the person with whom I spent my last time at Blue Cat.

“Why are you quiet, Dad?” he said, as we walked away. “Are you sad because it’s going away?”

Sean Leary
Sean Leary is an author, director, artist, musician, producer and entrepreneur who has been writing professionally since debuting at age 11 in the pages of the Comics Buyers Guide. An honors graduate of the University of Southern California masters program, he has written over 50 books including the best-sellers The Arimathean, Every Number is Lucky to Someone and We Are All Characters.
See More Articles From Sean Leary
Tagged: Abides BarBackyard BowlbeerBig LebowskiBlue CatBlue Cat Brew Pubbowlingbrew pubsDistrictDistrict of Rock IslandDr. Bob MurdochJohn TimmerJon McAteelocal restaurantsMilanpubsQuad CitiesRock IslandRock Island entertainmentSean LearyShane Scott