Can you believe it? Jimmy Eat World is coming to the Quad Cities!

Moeller Nights has just announced that Jimmy Eat World will be performing at The Rust Belt (533 12th Avenue East Moline) on Friday Nov 8 at 7 p.m. 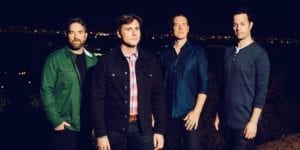 Tickets to this nostalgic show are only $30 and will go on sale this Friday Sep 27. You can purchase yours online at https://www.eventbrite.com/e/jimmy-eat-world-tickets-72975887845.

Jimmy Eat World has released seven studio albums, the last six featuring the current lineup. The band originally formed with a punk rock sound, first releasing a demo tape in 1993, followed by their first EP in 1994, titled One, Two, Three, Four. Their debut self-titled album (1994) was released with current guitarist Linton singing most of the lead vocals on the album. Jimmy Eat World released both their second and third albums through Capitol Records, with Static Prevails (1996) featuring their first single “Rockstar”. The critically acclaimed Clarity (1999) contained the single “Lucky Denver Mint”, which was featured in the film Never Been Kissed, and went onto garner a cult following.

The four piece’s commercial breakthrough came with the successful release of several singles from the album Bleed American (2001), four singles charted within the top 20 of the Hot Modern Rock Tracks, “The Middle” peaked at number one. Jimmy Eat World followed up with Futures (2004), featuring another Modern Rock Tracks number one, “Pain”. The RIAA certified Bleed American platinum and Futures gold, rewarding the two albums for selling over one and a half million records between them. The band’s sixth album, Chase This Light, became the band’s highest charting album, peaking at number five on the Billboard 200. Invented, the follow up to 2007’s Chase This Light, was released on September 28, 2010 on Interscope Records.

Don’t miss this unforgettable evening at The Rust Belt!

Tess Abney
Tess Abney was born and raised in the Quad Cities. Her passion for writing and entertainment was apparent at a very young age. Whether it is sharing local events and businesses with readers or sharing her thoughts on life, she finds comfort in the way words can bring people together.
See More Articles From Tess Abney
Tagged: East MolineEventsJimmy Eat Worldlive musicMoeller NightsQuad CitiesSean MoellerThe Rust BeltThings To Do