Molly Hatchet’s Flirtin’ with Disaster at The Rust Belt

Feelin’ like a little Flirtin’ with Disaster this Friday night?

Head to The Rust Belt (533 12th Avenue East Moline) this Friday Nov 1 for live music from Molly Hatchet, with opening guest Joe Stamm! Joe Stamm takes the stage at 7 p.m. and Molly Hatchet will continue the excitement at 8:30 p.m. Stick around after the concert for the Joe Stamm after party! 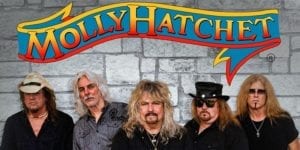 Tickets are just $20 in advance and $25 on the day of the show. Get yours today, online.

Molly Hatchet is an American Southern hard rock band formed by guitarist Dave Hlubek in Jacksonville, Florida, in 1971. The band is best known for their 1979 hit song “Flirtin’ with Disaster.”

The upcoming shows will see Ingram & Co. not only present their greatest hits, but they will also introduce their new vocalist Jimmy Elkins, who has joined the fold to replace the late Phil McCormack, who sadly passed away in April 2019. Elkins was the frontman of Florida band Bounty Hunter for a number of years, an act who has shared a stage with Molly Hatchet on various occasions over the past two decades. “To us it was the logical next step to ask Jimmy to become our new vocalist,” Ingram explains. “You can tell that he has the Southern rock genre and is a perfect match for Molly Hatchet, not only on a musical but also on a personal level.”

With Elkins at the center of their high-decibel Southern rock music, Ingram and his longstanding bandmates, keyboardist John Galvin, bassist Tim Lindsey, and drummer Shawn Beamer, continue to be a powerful musical force. Which is one of the reasons why the Molly Hatchet classics – from the opening track ‘Bounty Hunter’, the hard-drinking ‘Whiskey Man’, the programmatic anthem ‘Son Of The South’ and fan faves such as ‘Edge Of Sundown’ and ‘Fall Of The Peacemakers’ right up to the breath-taking finale, ‘Flirtin‘ With Disaster’ – really get down to business from the very first chords. Ingram: “In recording this album, we compiled a four-decade-long catalog of the songs that our friends wanted to hear. They would tell us what songs they wanted on the album, and we recorded them. Some of these songs have never been recorded on a live stage before, and we were honored and proud to be able to perform them for many generations of past, present, and future Southern rock fans.”

Tess Abney
Tess Abney was born and raised in the Quad Cities. Her passion for writing and entertainment was apparent at a very young age. Whether it is sharing local events and businesses with readers or sharing her thoughts on life, she finds comfort in the way words can bring people together.
See More Articles From Tess Abney
Tagged: Dave HlubekEast MolineEventsJoe Stammlive musicMoeller NightsMolly HatchetQuad CitiesThe Rust BeltThings To Do