Adler Theatre and JS Touring announced today that America’s premier comedian, Jerry Seinfeld, will return to the Adler Theatre stage on Tuesday, October 22 at 7:00 p.m. Tickets will go on sale to the general public on Friday, August 9 at 10:00 a.m. 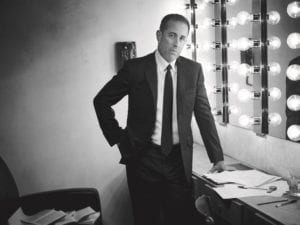 Seinfeld has been hailed for his uncanny ability to joke about the little things in life that relate to audiences everywhere. His latest projects include the Emmy nominated web series, “Comedians in Cars Getting Coffee” and his Netflix special “Jerry Before Seinfeld.” Seinfeld continues to perform both nationally and internationally.

Seinfeld made his Netflix debut with the original stand-up special “Jerry Before Seinfeld.” His latest project on Netflix is the Emmy-nominated and critically acclaimed web series “Comedians in Cars Getting Coffee,” which has garnered over 100 million views, and which the New York Times describes as “impressively complex and artful” and Variety calls “a game changer.”

Most recently, Seinfeld has been performing at the Beacon Theatre in New York City as part of an ongoing residency. Seinfeld began this overwhelmingly successful residency in 2016 and continued it throughout 2017 before resuming again in January 2019.

Tickets go on sale to the general public on Friday, August 9 at 10AM ****Ticketmaster.com ǀ Adler Theatre Box Office****

Sean Leary
Sean Leary is an author, director, artist, musician, producer and entrepreneur who has been writing professionally since debuting at age 11 in the pages of the Comics Buyers Guide. An honors graduate of the University of Southern California masters program, he has written over 50 books including the best-sellers The Arimathean, Every Number is Lucky to Someone and We Are All Characters.
See More Articles From Sean Leary
Tagged: ’ comedyAdler Theaterdowntown DavenportJerry Seinfeldlocal comedylocal theater