Home › Articles › Things To Do › From England to Malibu, the Ruen Brothers Are Now Making a Stop in the Quad Cities!

Whether you romanced and danced to the music of the 50’s, or wished you would have, you won’t want to miss the next musical performance at Triple Crown Whiskey Bar & Raccoon Motel! 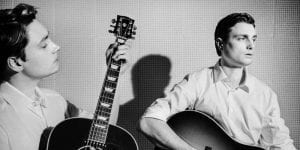 The rockabilly band from Scunthorpe England, features siblings Henry and Rupert Stansall. The band released its debut album, All My Shades of Blue in 2018. The album was produced by noted producer Rick Rubin and received favorable reviews from Rolling Stone Magazine and Entertainment Focus. The album also includes the talents of such boldface names as Chad Smith of the Red Hot Chili Peppers on drums, along with The Killers’ Dave Keuning on strings and Faces and Small Faces legend Ian McLagan on keyboards. The record features both music and lyrics written by the boys throughout their improbable journey.

Inspired by their music aficionado father who raised the duo on a steady diet of The Rolling Stones and The Everly Brothers, the two would rehearse in the family kitchen while scrounging for gigs in their blue-collar hometown of Scunthorpe, England. It wasn’t until a move to London and the success of their track “Aces,” a song recorded in their studio apartment, that the boys from Scunthorpe went from pub performers to BBC radio staples.

The brothers quickly collected a global audience of fans, none more influential than iconic producer Rick Rubin, who quickly recognized their talent and promptly took the brothers under his wing.

For more information on the Ruen Brothers, visit https://ruenbrothers.com/.

Tickets for this show are just $10 and can be purchased online at https://www.eventbrite.com/e/ruen-brothers-tickets-53025684249.

Tess Abney
Tess Abney was born and raised in the Quad Cities. Her passion for writing and entertainment was apparent at a very young age. Whether it is sharing local events and businesses with readers or sharing her thoughts on life, she finds comfort in the way words can bring people together.
See More Articles From Tess Abney
Tagged: Chad SmithDave KeuningDavenportEventsHenry Stansalllive musicMoeller NightsQuad CitiesRaccoon MotelRick RubinRuen BrothersRupert StansallScunthorpeSean MoellerThings To DoTriple Crown Whiskey Bar