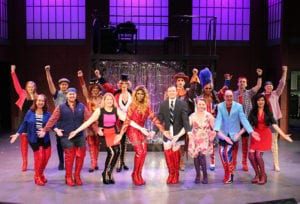 We’re barely past two weeks into 2020 and already we’ve got a strong contender for best show of the year.

Circa ‘21’s “Kinky Boots” is indeed that good, a fantastic staging of a fabulous show, featuring a number of touching, buoyant moments, wonderful performances and terrific material. It’s such a magical, uplifting evening of entertainment, one of pure joy and spirit, with a positive message that doesn’t feel preachy, but rather, common sense.

Wonderfully directed by M. Seth Reines, and terrifically choreographed by Christie Kerr, “Kinky” begins at the Price & Son Shoe Factory in the gritty British manufacturing hub of Northampton. We see a brief vignette of young Charlie Price (Michael Penick) and his father (uhhh “Richard Patrick,” who looks astonishingly like Tom Walljasper in a toupee), as the son is leaving to find his destiny away from the family business in London with his chic fiancée, Nicola (Savannah Bay Strandin). Flash forward a very short bit, and Dad has passed, and Charlie finds himself in a bit of George Bailey situation, stuck back at home tending to the father’s failing shoe business, minus the frustratingly incompetent Uncle Billy, thank the Jesus. 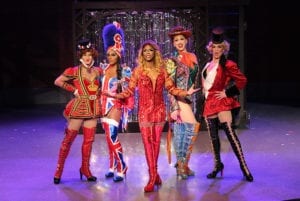 It quickly becomes apparent just how poorly the business has been doing, and a huge cancelled order just heaps more dirt on what is looking like a quick grave for the business of Al Bundy. But then fate strikes: Charlie, by chance, meets the charismatic, mysterious and cheekily named Lola/Simon (Malik Harris), a drag queen with secrets and strengths of her own. The two engage in conversation, and, lightning bolt, Charlie decides to hire Lola as a designer of “kinky boots” made to tailor for drag queens.

Can satisfying that niche business and its potential offshoots save his father’s factory? Well, given that he has few if other options, he decides to give it a shot. Charlie and Lola begin the difficult process of converting the factory over to their goal of coming up with a line of new, flashy, custom boots to showcase at the Milan Fashion Show in order to drum up business. And, along the line, we meet their co-workers and conspirators in the goal, from compliant buddies like George (Tom Walljasper, sans toupee and alias), to supportive partners like Trish (Shelley Walljasper), Pat (Megan Opalinski), and under the radar love interest Lauren (Brittany Church). We also meet the resistance, in blue collar types uncomfortable with the notion, and with Lola, in Dan (Mitchell Matyas), and his fellow factory workers (Bobby MacDonell and Jacob Tarconish).

However, most spectacularly, we meet Lola’s friends and fellow queens, the Angels – Shequal Wrights (Sean Jaenicke), Crème Brulee (Kevin Korczynski), Lucy Couture (Weston Lundy) and Fruitee Pebblez (Cory Shorter). To say they steal the show every time they’re on the stage is a vast understatement. They’re like an explosion of confetti upon a sea of beige, and their triumphant energy rockets the show every time they appear clad in magnificent costumes and haloed in sassy auras. They don’t really say much, but every time they stride out they command the stage in brilliant fashion.

The same can be said of Lola. Malik Harris puts on one of the best performances I’ve seen on any local stage in a long time. Sincerely, earthy, heartfelt, vulnerable, but alternately strong, vibrant and defiant, Harris doesn’t perform Lola, Harris inhabits the character and brings her to life. It’s a crucial role in this show, and Harris nails it.

Penick likewise has his blandish charms as the more low key Charlie, who shares quite a bit in terms of life path and experience with Lola, beyond the obvious. The only time he really falters is in the part of the show that likewise rings untrue for me, the seemingly perfunctory third act crisis when Charlie’s character shifts dark and words are said that seem uncharacteristic for him. I get script mechanics, that’s the part of the show where you go dark to cycle back up to the light at the finale, but that aspect doesn’t really ring true with someone as laid back as Charlie up to this point. Personally, I think the crisis point should’ve come from another character, probably the underutilized Nicola, whose spikiness and self-centered nature could’ve been put to better use as a villain.

But, that’s a minor criticism overall, because the show is fabulous fun. The book by Harvey Fierstein (yup, that Harvey Fierstein, the guy with the crackly voice from the movies) has tremendous heart, and the music by Cyndi Lauper (yup, that Cyndi Lauper, the girl with the multi-colored hair from the ‘80s) is perfect. The melodies are charming and bubbly, the harmonies are sophisticated, and the show has its share of lovely, memorable tunes, from the charming synth pop of “The History Of Wrong Guys” to the anthemic “Raise You Up/Just Be.”

The performances beyond Harris and Penick are solid. Matyas really shines at his character’s turn towards compassion, Church is spunky fun in a Rebel Wilson way, Strandin does a great job as the icy underutilized Nicola and Walljasper is always a joy to watch regardless of his role. The costumes are lush and spectacular, especially the titular boots and the drag queen ensembles, the sets are clever and smart, and, as previously mentioned, the Angels really do elevate the show.

“Kinky Boots” has a wonderful message of acceptance, love, and the yearning to belong and find ourselves and our place in this world. Its characters, even those secondary ones, share that goal, whether overtly or not, as each keeps moving towards a spot perhaps they can’t even see, but they’ll know when they find it. And so it is with most of us, wandering forward, looking for that place where we can not only call our surroundings home, but we can find that in ourselves and our hearts.

“Kinky Boots” is a must-see show. Gloriously entertaining and fabulously positive, it’ll leave you with a kick in your step.