Home » Articles » Theatre » Circa off their rockers with ‘Shear Madness’

Circa off their rockers with ‘Shear Madness’ 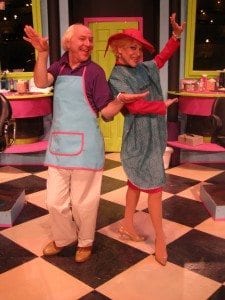 Circa ’21 is hoping to cut up audiences in their latest show, “Shear Madness.”

The dinner playhouse is presenting the local debut of the longest running comedy in U.S. history. Running through April 30, this slapstick whodunit has played for over 30 consecutive years in Boston and nearly as long at Washington D.C.’s Kennedy Center for the Arts, and Rock Island’s beloved dinner theatre is proud to host both the show and its cast of sterling professional talents.

Reservations are available through the Circa ’21 ticket office located at 1828 Third Avenue, Rock Island, IL or by calling (309)786-7733 extension 2. Online reservations may also be made by visiting circa21.com and clicking on “order tickets now.”

Frequently referred to as “America’s longest-running play,” the show delights audiences with its unique blend of madcap improvisation and spine-tickling mystery. Paul Pörtner’s comedy takes place in a hairstyling salon, and is chock full of up-to-the-minute humor, as improvisation plays a large part in the show’s success. During the course of the action, a murder is committed, and the audience is invited to spot the clues, question the suspects, and solve the crime.

As “Shear” is heavily dependent on audience involvement, which means the show is also heavily dependent on improv, and in fact, the character who committed the murder can change from night to night. From one production to another, the exact outcome is never the same, which is partly why audiences have flocked to this tale of merry mayhem time and time again with no signs of stopping! 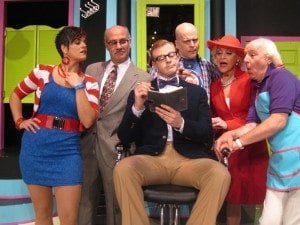 “Shear” director Sean McCall’s cast is composed of six exceptional professional talents, five of whom have made previous appearances on the Circa ’21 Stage. Among the show’s suspects are three performing favorites with long lists of credits at the Rock Island venue: Brad Hauskins (recently of The Sound of Music, Fiddler on the Roof, and Love, Lies, and the Lottery); Tristan Layne Tapscott (Irving Berlin’s White Christmas, Boeing-Boeing, and Les Misėrables); and Tom Walljasper (Phantom, A Wonderful Life, Route 66).

Joining this trio of talents are fellow Circa ’21 veterans Jennifer Poarch (Buddy: The Buddy Holly Story) and Carrie SaLoutos (The Dixie Swim Club). And making his Circa ’21 debut with the show is professional actor Jeff Haffner, whose resume includes roles in South Pacific, The 1940s Radio Hour and Shear Madness at the Old Creamery Theatre in the Amana’s.

In all, the cast of characters and cut-ups is looking at making the show shear-ly amusing.

Sean Leary
Sean Leary is an author, director, artist, musician, producer and entrepreneur who has been writing professionally since debuting at age 11 in the pages of the Comics Buyers Guide. An honors graduate of the University of Southern California masters program, he has written over 50 books including the best-sellers The Arimathean, Every Number is Lucky to Someone and We Are All Characters.
SeanLeary.com
See More Articles From Sean
Tagged: ‘Shear Madness’ comedyBrett HitchcockCirca '21Denny HitchcockQuad-Cities theaterSean Leary