Circa Making It ‘Rain!’

Sean Leary September 13th, 2019 Things To Do, Theatre, Rock Island, Local, Events, Entertainment Share:
What does Circa ’21 have in common with Lil John?
They both love to make it “rain!”
For the final production in the theatre’s spectacular 2019 season, Circa ’21 Dinner Playhouse closes its 42nd year with the eagerly awaited return of a musical-comedy classic: the Tony Award-nominated SINGIN’ IN THE RAIN. Running through Nov. 2, this funny, romantic, endlessly charming adaptation of Hollywood’s iconic movie musical boasts marvelously memorable songs, unforgettable characters and is being brought to life by a splendid team of returning and debuting professional talents.
Performances of SINGIN’ IN THE RAIN will be on Wednesday, Friday, and Saturdays evenings at 7:45 p.m., Sundays at 5:45 p.m., and Wednesday matinées at 1:30 p.m. Ticket prices are $53.55 for the evening dinner-and-show productions and $46.73 for the plated-lunch matinées. 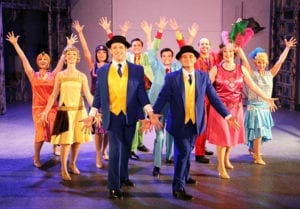 Tickets are available through the Circa ’21 ticket office. For reservations, contact the theatre at 1828 Third Avenue, Rock Island, or by calling 309-786-7733 ext. 2. Online reservations may also be made by visiting circa21.com.
Stanley Donen’s 1952 movie topped the American Film Institute’s 100 Years of Musicals list and, in 2007, was ranked as the fifth-greatest motion picture of all time. Having been adapted for the stage by the legendary theatre team of Betty Comden and Adolph Green, the SINGIN’ IN THE RAIN stage musical “pours down” delight, capturing the waning days of the silent-screen era as they give way to newfangled talkies and treating audiences to a production that Chicago Theatre Review called “a glitzy, glamorous homage” that “offers up a flood of entertainment.” 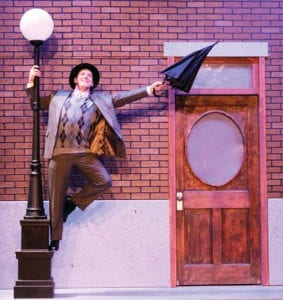 With the premiere of “The Jazz Singer” making Hollywood frantic, the studios are forced to suddenly change all the movie-making rules at once in order to accommodate sound, and in doing so, they leave silent pictures – and some of their stars – behind. When Monumental Studios consequently turns its silent The Dueling Cavalier into the musical The Dancing Cavalier, it’s faced with a problem: The movie’s star Lina Lamont can’t sing, and in truth, can barely talk, as her voice sounds like nails on a chalkboard.
Enter Kathy Selden, an aspiring actress whose dulcet tones are able to cover Lina Lamont’s, calling into question what it means to act, how credit is distributed, and how one gets a truly fair shake in the movie business. Filled with romance, nostalgia, this delightful treat for all ages features some of the best-loved comedy routines, dance numbers, and love songs ever written, including “Good Mornin’,” “Make ‘em Laugh,” and, of course, hoofer Don Lockwood’s show-stopping dance number “Singin’ in the Rain.”
Directing SINGIN’ IN THE RAIN is Circa ’21 veteran Seth Reines, whose recent productions across the country have included “Chicago” for Florida’s Broadway Palm Dinner Theatre, “Aida” for Arizona’s Hale Centre Theatre and “Sweet Charity” for the Arizona Broadway Theatre.
Circa ’21 veteran Eric Churchill returns to plays Kathy Selden and playing the iconic Don Lockwood is Circa ’21 newcomer Chris Russell. Another pair making their Circa ’21 debuts are Sarah Mae Banning as Lina Lamont and James Garrett Hill as “Make ’em Laugh” singer Cosmo Brown. 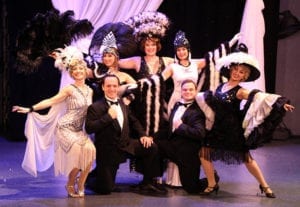 Quad City native Mason Moss is the shows musical director and Lauran Stanis from Phoenix is the choreographer. The rest of the talented cast is composed of first-time Circa ’21 performers Millie Martin, Trey Mendlik, Megan Orlowski,  Joseph Piercey and Amanda Torsilieri.  In addition this talented group returning Circa ’21 talents Barry Kramer “Holiday Inn,” Michael Penick “Newsies,” Tristan Tapscott “Shear Madness,” Shelley Walljasper “Fiddler on the Roof,” Savannah Strandin “Freaky Friday” and Tom Walljasper “Shear Madness.” round out the cast.
The entire Circa ’21 team is thrilled to be presenting the area return of one of its most beloved musical presentations, and urges audience members to make reservations early for what is sure to be an unforgettable season-ending production. Make reservations with the Circa ’21 ticket office at 309-786-7733 ext. 2  or Circa21.com, and share with your family the hilarity, song-and-dance delights and “splashy” fun of SINGIN’ IN THE RAIN!
Advertisement

Sean Leary
Sean Leary is an author, director, artist, musician, producer and entrepreneur who has been writing professionally since debuting at age 11 in the pages of the Comics Buyers Guide. An honors graduate of the University of Southern California masters program, he has written over 50 books including the best-sellers The Arimathean, Every Number is Lucky to Someone and We Are All Characters.
See More Articles From Sean Leary
Tagged: Brett HitchcockCircaCirca 21 Dinner PlayhouseDenny HitchcockSingin’ in the Rain