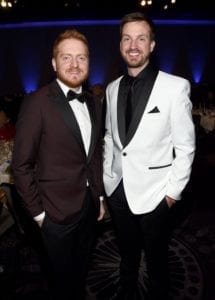 Scott Beck and Bryan Woods, the former local filmmakers behind the horror hits “A Quiet Place” and “Haunt,” are back with a new horror anthology film set in Iowa, and they’re teaming up with some big names — including former Iowan Ron Livingston.
According to Beck, “Our next project includes five of our favorite things: Sam Raimi, Taissa Farmiga, Ron Livingston, horror, and our home state of Iowa! We’re honored to be writing and directing the episode “Almost There” for the upcoming anthology 50 STATES OF FRIGHT.”
More information will be forthcoming on your site for fun, free, local entertainment, and all things Beck and Woods, www.quadcities.com!

Sean Leary
Sean Leary is an author, director, artist, musician, producer and entrepreneur who has been writing professionally since debuting at age 11 in the pages of the Comics Buyers Guide. An honors graduate of the University of Southern California masters program, he has written over 50 books including the best-sellers The Arimathean, Every Number is Lucky to Someone and We Are All Characters.
SeanLeary.com
See More Articles From Sean
Tagged: Bryan WoodsRon LivingstonSam RaimiScott BeckTaissa Farmiga