Home » Articles » Local » End Of An Era For Local Arts: Midcoast Closing Up Shop In 2020

End Of An Era For Local Arts: Midcoast Closing Up Shop In 2020

Midcoast Fine Arts, one of the most impactful grassroots organizations and arts groups in the region over the past three decades, will close up shop in March 2020, a Midcoast official confirmed today.

The demise of the group also means that Bucktown, 225 E. 2nd Street, and all its galleries, will be shuttered.

Financial reasons were cited as the main impetus for the shutdown. Bucktown was struck incredibly hard by the flooding of early 2019, and was shut down for several weeks, thus negatively impacting its business and causing it thousands in extra expenses due to damages.

There’s no word on whether the group will morph into another or whether any of its galleries or programs will potentially be resurrected under another banner. Other Midcoast officials aside from Campbell could not be reached for comment at this time.

Word began to filter out over the last 24 hours about the shutdown through different artists groups, and local artist Dan Johnson posted on his Facebook, “Midcoast will cease operations in March 2020. This means Bucktown Center will be shuttered along with all artist studios, my own included. Sad day.”

The group, spearheaded by Dean Schroeder and a handful of area artists, got its start in the early 1990s as an outreach effort to champion area artists and enhance life in the Quad-Cities. Through the group’s hard work, it became a boon for local creators, leading to a number of arts scene additions to the Q-Cs, including The ARTery in downtown Rock Island, exhibits at the airport and various other locales, and of course, the Bucktown building in downtown Davenport, where it currently resides. Midcoast was also a part of various other outreach programs on the performing arts side, and arts in the school programs.

Hundreds of artists benefitted from the hard work of those behind-the-scenes, enabling them to showcase their works and connect them with not only customers for their artworks, but people throughout the community looking to have their lives colored and enriched by imagination and art. 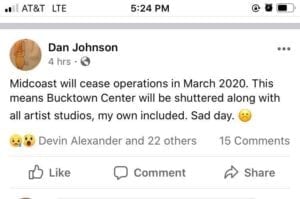 According to the Midcoast website, “For the artist, MidCoast is the only arts organization within a 90-mile radius where beginning artists can show and sell their art while they learn the business of art; most other places offer only juried shows that beginning artists have trouble entering. The arts also provide fiscal security for the community as endeavors that attract and retain quality employees and employers.

“Spaces like the Bucktown Center for the Arts and MidCoast galleries in Davenport, Rock Island, and Moline increase traffic in our metropolitan centers, enhancing the value of our downtowns and fostering arts and culture as an effective urban revitalization tool.

“MidCoast Fine Arts is the only not-for-profit organization in the Quad Cities that dedicates its mission entirely to supporting living, local visual artists and exhibition spaces for them. Our exhibitions and programs add to the economic vitality of the community and make the Quad Cities a cool, creative, connected place to live, work and raise a family.

It’s a sad day and unfortunate end for an arts group with a profound and lasting legacy on the area. However, patrons have another three months to enjoy the galleries and artworks.

Sean Leary
Sean Leary is an author, director, artist, musician, producer and entrepreneur who has been writing professionally since debuting at age 11 in the pages of the Comics Buyers Guide. An honors graduate of the University of Southern California masters program, he has written over 50 books including the best-sellers The Arimathean, Every Number is Lucky to Someone and We Are All Characters.
See More Articles From Sean Leary
Tagged: Alan CampbellBucktown CenterDean Schroederdowntown Davenportlocal artistslocal galleriesMidcoast Fine Arts