Like most of her work this past year, Lindsay Hocker has been mainly at home as marketing specialist for Black Hawk College, Moline. This week, she’s attending the virtual national conference for the National Council for Marketing & Public Relations (NCMPR), and the 33-year- 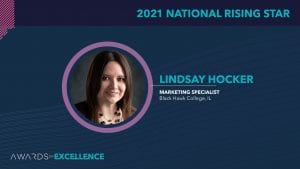 The only organization of its kind that exclusively represents marketing and public relations professionals at community and technical colleges, NCMPR has more than 1,700 members from nearly 650 colleges across the U.S. and Canada.

“As a newspaper reporter, my favorite thing was to write profile stories, and I get to do that about alumni and students,” Hocker (who formerly wrote for The Dispatch/Rock Island Argus and was communication specialist for Rock Island Economic Growth) said Wednesday.

“It’s also been a great job got to put skills to use that I already have, and I’ve also been able to flex my creative muscles in a new way,” she said of her prodigious photo and video work. “It always feels great to add to your skillset.”

Hocker (a NCMPR member) is the first marketing specialist at Black Hawk College; she was nominated for Rising Star by John Meineke, 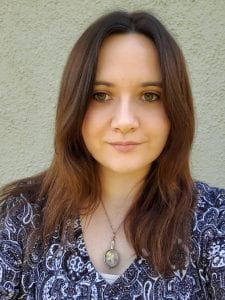 Hocker, 33, earned her bachelor’s in journalism and mass communications, and religious studies, from the University of Iowa.

Since joining the staff in July 2018, in her first two and a half years, she wrote more than 150 blog posts spotlighting students, employees, trustees and success tips. One post from June 2020 even helped a featured student (who moved from Togo, Africa) land an Information Technology internship.

Blaise Kinto moved to East Moline to study at Black Hawk College because his brother, Yawovi, recommended it.

“Yawovi got his GED from Black Hawk College, and that allowed him to have the better life and career he has today,” he said in Hocker’s article.

Kinto completed the Adult Basic Education program in 2017, and graduated from the English as a Second Language program in Spring 2019.

“I have learned and am still learning a lot through Black Hawk College,” he said. Kinto earned a 2019 Student Commitment to Excellence Award.

“When we were writing the job description and dreaming of the ideal applicant, we had no idea we would be able to find someone to perfectly fill it as Lindsay has,” Julie Wine Johnston, Black Hawk’s assistant director of marketing and public relations, wrote of Hocker.

The Rising Star Award recognizes newcomers who have demonstrated special creativity or ability in marketing and PR and show evidence of a promising future in the field. It is awarded annually in each of NCMPR’s seven districts, and district winners automatically qualify for consideration for the national award.

“What stands out in addition to what she does is the way she does it,” Johnston said of Hocker. “I work very closely with Lindsay and 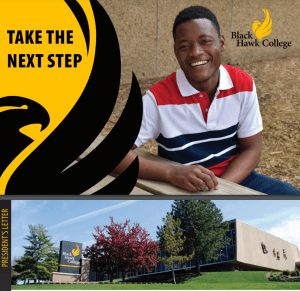 The first page of the Black Hawk “viewbook” that’s aimed at prospective students.

appreciate her approach to her own work as well as how she collaborates as part of the team.”

Hocker viewed the challenge of her new job as an opportunity “to move and shake things up a little bit” – both for the marketing department and for her skillset. She studied journalism at University of Iowa; her strength is in storytelling, but she’s used her new position to grow her abilities.

Today, one of her favorite parts of the job is video work, and she credits NCMPR for helping her figure out how to make her productions stand out.

Last June, she attended an NCMPR webinar, “Producing Engaging Videos During COVID-19 and Beyond.” One lesson she learned was that videos don’t need entirely new content: It’s OK to use previous footage, stock footage, graphics and animation.

“Right after that, I was feeling super inspired, and I made a video of what fall semester will look like with Covid going on,” Hocker said. “The webinar about how you could approach video during Covid was really interesting and eye-opening for me. It opened up new possibilities for me.”

For the short video, she found stock footage of Covid-19 icons, like masks and thermometers, and she borrowed a video clip she’d previously shot of a packed orientation room. She crafted the video from beginning to end: She wrote the script, did the voiceover, produced the video and pitched it to her boss.

“They loved it.” Hocker said. “I used things I hadn’t thought to use before. When you have those moments of inspiration and it works out, it 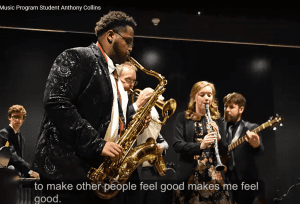 One of the BHC videos highlighted music student Anthony Collins.

feels great. That was a  really cool project. It was cool to come up with the idea, see it through from start to finish, and helped us communicate with students.”

The video was posted on the Covid section of www.bhc.edu, and Black Hawk’s social media. It can be seen at www.bhc.edu/campus-reopening-and-fall-2020-plans/.

“Black Hawk has done a great job making sure safety is the top priority, and being very thoughtful about how we handle Covid,” Hocker said Wednesday. “Black Hawk has always been ahead of the curve on being responsive.”

“When I look back and seeing this whole year, there’s been multiple times where I thought how well we did in making these plans and making sure safety was at the forefront,” she said. “And by we, I mean the administration. We have just been impressed with how much of a priority safety has been, but also making sure that students are still getting what they need and being served well.”

Although face-to-face classes are limited to labs this spring, BHC is still open to students who can use campus bookstores, computer labs and meet with advisors and other staff as needed. All student services are also available virtually.

The Spring 2021 semester began Jan. 19 and all classes were online only for the first week. The two weeks following spring break (which is this week) will also be virtual.

Courses are all online except for those that require face-to-face instruction. These classes will be blended, with online lectures and face-to-face labs. At entrances to each building, students and staff must have a temperature check, wear a mask and answer questions in order to get a day pass that clears them to be on campus.

BHC had a total 2020 enrollment of 7,014 students, including its East Campus in Galva, Ill., 50 miles east of Moline. Since Aug. 10 (through March 14), the college reported a total of 113 positive Covid cases in students and faculty.

Highlights of a busy job

Hocker works in the marketing department with BHC veteran Holly Smith, who is in charge of PR with media, including putting together 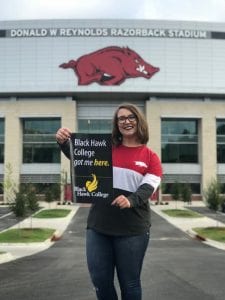 Hocker created a “BHC Got Me Here” campaign highlighting graduates who transfer to four-year schools to earn their bachelor’s degree. This one is of 2018 grad Brittany Luttrell, who went to University of Arkansas.

Since Hocker’s position was new, she started and creates content for the BHC blog, which is at www.bhc.edu/about-us/blog/. She compiles

copy for Black Hawk ads, and each year updates the college’s viewbook for prospective students, which is a print product and can be found online.

“I was really excited to hear about storytelling component of the job, and the college’s core values,” Hocker said of when she interviewed in 2018.

She assumed responsibility for marketing and PR activities at the East Campus;  before the pandemic, she would go out there at least once a month for photos and interviews. Hocker created and developed the “BHC Got Me Here” campaign (starting in December 2018)  — working on all campaign components: remote interviews, photography and content.

“I had the idea to really highlight our transfer students, who go to college all over the country,” she said, noting she designed a poster that said “Black Hawk College got me here,” and asked students to take pictures at landmarks at their new campus. Hocker did short Q & As with each one, with their photo accompanying.

She’s compiled more than a dozen of those, which are posted on the BHC website and on social media.

One of the many videos Hocker has done is one featuring two BHC graduates – Alejandra Martinez and Ashley Hanson, called “Be That 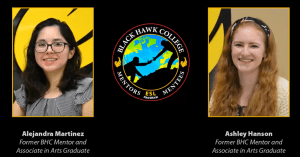 One of Hocker’s videos featured two BHC graduates who were ESL mentors for international students.

The program joins students with BHC international students to share and exchange cultural information. The program is designed to help

international students practice their English and learn about American culture and the educational system, and to help students learn about other cultures.

These women have gone on from the program to work construction jobs in different trades, but they have this in common: all three recommend HCCTP and encourage other women to pursue construction careers.

The program aims to increase the number of minorities, women and disadvantaged individuals working on Illinois Department of Transportation highway construction projects. The class includes a mix of hands-on experiences and classroom work.

To learn more about the national marketing council, visit www.ncmpr.org/about-ncmpr.

Jonathan Turner
Jonathan Turner has been covering the Quad-Cities arts scene for 25 years, first as a reporter with the Dispatch and Rock Island Argus, and then as a reporter with the Quad City Times. Jonathan is also an accomplished actor and musician who has been seen frequently on local theater stages, including the Bucktown Revue and Black Box Theatre.
See More Articles From Jonathan Turner
Tagged: black hawk collegelindsay hockermarketing and public relations. national council for marketing and public relations