REVIEW: “Beehive” A Colorful, Exhilarating Triumph at Rock Island’s Circa ‘21

While I had been inside Circa ’21 Dinner Playhouse a few times over the past year (for interviews and an audition), I had not been back before Wednesday to see an actual stage show since January 2020. 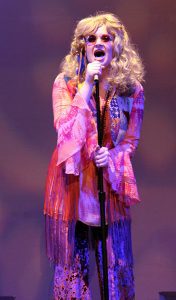 Like a certain Dorothy once said, “There’s no place like home.” And even with what seems like the final phase of Covid restrictions (patrons seated every other table, no buffet, servers wearing masks), Circa still dependably seems like a comforting, familiar home away from home for me.

In the capable hands of Bootlegger Kathryn Calhoun, I was simply overjoyed to be back for a tasty dinner and delicious show, with Circa’s latest – the glorious, all-female tribute to the ‘60s, “Beehive: The Musical.”

With no buffet-style meals, Circa has been offering appetizers for the first time (four-cheese stuffed mushrooms and shrimp cocktail), and a choice of two of four entrees with sides. I had mushrooms, chicken-fried steak and chicken with soy sauce-honey glaze, mashed potatoes and peas, and it was great. 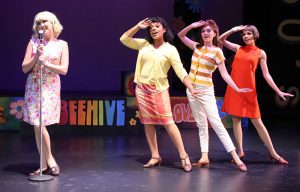 It was such a thrill to be eating out indoors again, the stage entertainment was another form of delectable dessert (I had the amazing peanut-butter ice cream pie, with Oreo crust, for actual dessert).

The four-person Bootlegger pre-show started 15 minutes earlier than usual (to help cut down on the time inside presumably), and it was perfect. As the super-friendly Bootleggers always play off the theme of the current show, Brad Hauskins explained that there’s a grand tradition of hair-themed theater – from “Beehive” to “Hairspray” to “Shear Madness.”

Of course, the pre-show did a medley from a musical Circa has never done (and will likely never do), the 1967 revolutionary “Hair” – oh so appropriate for the bald Hauskins to begin, “Give me a head of hair.”

With fellow Bootleggers Calhoun, Kirsten Sindelar and Derrick Bertram, they covered many of the groovy hits (like “Easy to be Hard,” “Age of Aquarius” and “Let the Sunshine In”) with gusto and solid harmonies.

The main show, “Beehive,” presented an exuberant, panoramic trip through the musical, social and political landscape of the turbulent ‘60s, with outstanding renditions of more than 30 songs of the decade – many in brief, quick succession. 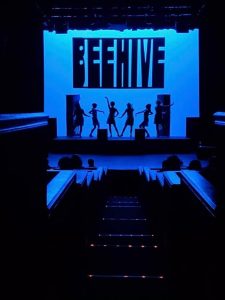 The opening silhouette for “Beehive” at Circa ’21.

The fun, frothy flashback to the fabulous females who left their indelible mark on pop music boasts an all-star cast and crew. 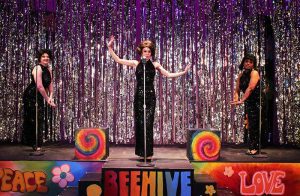 A scene from “Beehive: The ’60s Musical” at Circa ’21 Dinner Playhouse, featuring Noel Huntley, left, Ravyn Davis and Kira Rangel.

They all handle the staggering volume and diversity of both songs and costume/wig changes with speed, grace, aplomb and professional polish.

Half of the joy in seeing “Beehive” is literally seeing the rainbow of bright colors depicted with the set, lighting and outfits. I loved the arresting opening number that presents the cast in darkness and dramatic silhouette.

Hiatt’s attention to detail is evident in the first women’s outfits (all similar in style), where the color of their boots match the main color of their dress, and their head accessories also perfectly complement the color scheme.

Holgersson seemed to have a riot in playing with the “peace” and “love” themes and rainbow-mood look of the set, which also helps place you back in the nostalgia of the period.

But beyond the stunning visuals, “Beehive” also is a riot of sound and soaring voices, as each woman gets the opportunity to shine to a dazzling degree.

The first act alone – focusing on the more innocent years, pre-JFK assassination – features 18 songs alone. Those highlights include “It’s My Party” and Supremes, led by Strandin and Davis. Bigelow is tremendous in the sprightly “You Can’t Hurry Love” and “My Boyfriend’s Back,” and Huntley nails the classic yearning of “Will You Still Love Me Tomorrow” (co-written by Carole King when she was 18).

Myers is adorable in “Then He Kissed Me,” and Strandin ups the “aww” factor by holding a framed of her real boyfriend (Tristan Tapscott) during the cute “Baby I Love You.” The consistent high energy of the show is embodied in the Act 1 closer, “Beehive Dance.” 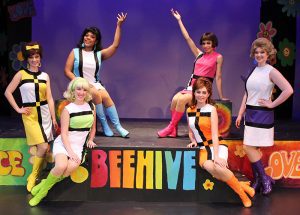 Harsh reality intrudes in Act 2, with assassinations, civil rights demonstrations, Vietnam, and the struggle for women’s rights. At the start, Rangel and Davis are excellent in the mournful “Abraham, Martin and John.”

The shorter second act is an unending string of powerful, deeply felt numbers. Myers is proud and defiant in “You Don’t Own Me”; Strandin and Bigelow are beguiling and bewitching in “Son of a Preacher Man” and “To Sir, With Love,” respectively.

Rangel just about brings down the house with her sultry, seductive Tina Turner in “River Deep/Proud Mary,” which ends with urgent, upbeat intensity.

Huntley then dominates the stage with a mini-concert of her own, first as Grace Slick in 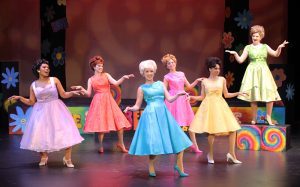 The full cast of “Beehive” grooving at Circa ’21, Rock Island.

Jefferson Airplane’s “Somebody to Love,” then a stupendous Janis Joplin set of “Cry Baby,” “Try” and “Me and Bobby McGee,” channeling Woodstock and the wailing, magnetic force of that music legend.

Rangel returns to bring us even higher with her Aretha Franklin medley, including “Natural 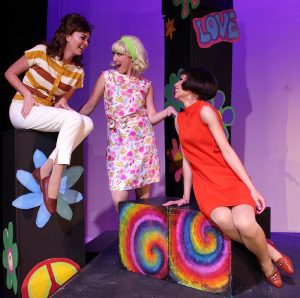 Woman,” and when the whole cast comes back with a reprise of some of the evening’s previous hits, we’re all up and dancing and clapping and in entertainment heaven. What Covid? Never heard of it….

Thank you all at Circa for continuing to persist and work your hardest to bring us first-class musical theater. It is very much appreciated.

Plated dinners will be served in lieu of the traditional buffet meals. For the safety of guests and staff, face masks must be worn whenever guests are away from their tables. For more information, call 309-786-7733, ext. 2, or visit www.circa21.com.

Online reservations are not available for this show.