Ballet Quad Cities Back to Delight Outside at Outing Club 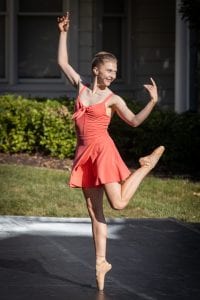 Seven dancers will perform works by four choreographers (including from company member Meghan Phillips) at 1 p.m., 3 p.m. and 5 p.m., on the lawn at the 125-year-old private club, 2109 Brady St.

“It was great, we sold out three shows, and we’re excited to be putting together a whole new one,” Phillips said Tuesday of their Outing Club debut last month.

“It was pretty challenging,” the 24-year-old dancer (in her third season here) said of doing three hour-long shows in a row. “One of my favorite parts of doing it in front of an audience is, we can look at them and engage with them.

“Outdoors, there are some challenges,” Phillips said. “Obviously, it’s a different space on the floor and the weather, but it kind of adds to the magic of it. It was beautiful — there was a slight breeze, the weather this weekend looks great out there.” 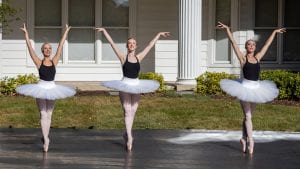 Having a smaller group of dancers, performing more at a distance due to Covid, allowed BQC to be more creative, she said.

“We did what we do best. The creativity and commitment that comes out of this company is really special,” Phillips said.

She has choreographed for BQC before and she really enjoys it.

“It’s always exciting to step into those shoes in a different mind frame,” Phillips said, noting her piece Sunday is modern, three dancers 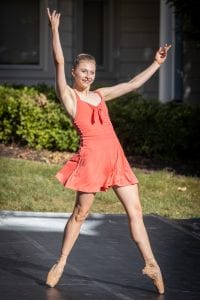 Meghan Phillips at the Outing Club on Aug. 30.

accompanied by the music “May in the Backyard.” “They’re barefoot; the whole show is a great variety – jazz, modern, classical. My piece is really playful and dynamic.”

Her favorite roles at Ballet Quad Cities include the Sugar Plum Fairy and Mina in Deanna Carter’s “Dracula.” As a choreographer, Phillips presented “On The Night Plain” in Manhattan at the 2018 American Dance Guild Festival.

Seeing such public support from the Aug. 30 shows was fantastic, she said. 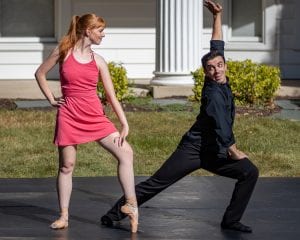 Madeleine Rhode and Nicholas Bartolotti at the Outing Club, Aug. 30.

“It was very encouraging for us; everyone has had their own challenging times,” Phillips said. “To have that support from the community was great,. We want to keep things positive and fun.”

BQC executive director Joedy Cook there’s no problem for the dancers to do three shows in one day. On Aug. 30, they had scheduled two performances, and added one more in the middle because of demand.

“They are energized, they want to dance,” Cook said Tuesday. “They want to perform, want to entertain people in the Quad-Cities. Many companies do give young aspiring choreographers an opportunity to set a piece, and I am building this company from within.

“Meghan has choreographed for us before; she has a very different style,” the director said, 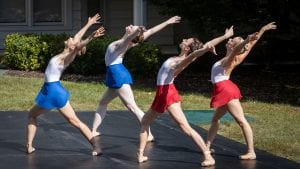 noting her piece also will use balloons. “She is more a modern choreographer.”

Veteran dancer Emily Kate Long (who’s now on staff and has choreographed BQC many times) has designed a piece based on ballet music from Richard Rodgers’ “Slaughter on Tenth Avenue,” and is set at The Outing Club circa 1930, Cook said.

As far as a next show, she’s exploring options for a Halloween theme, where patrons would be encouraged to come in costumes. Cook is talking with different venues, but said Outing Club “has been so good to us,” and that performance would be indoors, she said.

“That lawn is set up in such a way, there really is not bad seat,” she said. “It’s the perfect venue for an outdoor setting. We’ll have picnic boxes for children, very family-friendly. Come get out in the fresh air as a family, and have a little picnic.”

Tickets are $20, available at Eventbrite. Tickets will not be sold at the door.

There is a charcuterie picnic box available to order for $20 – it must be reserved by Thursday. There will be a cash only bar (no credit cards), and no outside food or beverages are allowed.

Jonathan Turner
Jonathan Turner has been covering the Quad-Cities arts scene for 25 years, first as a reporter with the Dispatch and Rock Island Argus, and then as a reporter with the Quad City Times. Jonathan is also an accomplished actor and musician who has been seen frequently on local theater stages, including the Bucktown Revue and Black Box Theatre.
See More Articles From Jonathan Turner
Tagged: Ballet Quad-CitiesJoedy CookOuting Clubquadcities balletquadcities dance