Anderson To Retire As CEO Of Community Home Partners

After 22 years at the helm of the Rock Island Housing Authority (RIHA) and now its new managing entity Community Home Partners (CHP), Susan Anderson has announced plans to retire next January.

Anderson, who serves as Chief Executive Officer for CHP and Executive Director for RIHA, shared her decision with the organizations’ respective boards at their recent meeting. She plans to stay until next January to assist in the leadership transition.

“I’m most proud of how far we’ve come as an organization and a community in our efforts to provide families with attractive, livable, and 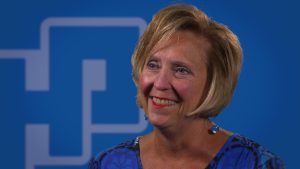 During her tenure, the agency has invested more than $70 million in new and improved housing stock, revitalizing Rock Island’s neighborhoods and impacting the lives of thousands of residents. Projects have included demolition of obsolete public housing projects, and construction of a variety of new housing options for the city’s residents.

Looking back on two decades of work that “changed the face of public housing in Rock Island” she said “It’s been quite a long journey, and a heartfelt journey.”

Over the years, the housing authority has earned (#) national awards in recognition of its resident programming, property development, homeownership initiatives, administrative leadership, and agency innovation. Anderson also has been honored for her work by the statewide housing authority association having received the prestigious David W. Morgan award for her leadership of affordable housing development in Illinois and her outstanding accomplishments in Rock Island. During her career, she was honored to speak and train at multiple national conferences hosted by PHADA and NAHRO, national affordable housing associations. She also created curriculum and taught numerous affordable housing courses for Rutgers University.

Anderson will leave behind a 40-year career spent in public and private housing management and urban development across the Midwest. She began her career in Chicago as a housing manager with the Illinois Housing Development Authority before joining Chicago-based CNA Insurance Companies to oversee its managed properties. She later became Director of Organizational Development for the Dayton, Ohio, Housing Authority. She served as Vice President for Integrated Community Services in Appleton, Wis., before moving to the Quad-Cities.

She joined RIHA in 2000 as its Executive Director. At the time, the authority was experiencing numerous operational challenges including receiving the designation of “Troubled” from the U.S. Department of Housing and Urban Development (HUD). The authority’s public housing properties were aging and many were in disrepair, which, in part, created vacancy problems and financial difficulties for RIHA.

“We had to get the units leased and rents coming in to determine where we wanted to go with our strategic plan,” she recalled. “We worked with the board to get a solid vision and to decide who we wanted to be and how to serve Rock Island.”

As a result of operational changes and improvements, RIHA first earned the designation of “High Performer” from U.S. Department of Housing and Urban Development (HUD) in 2002. The assessment monitors four housing functions: management operations, physical condition of the properties, financial operations and capital fund performance. RIHA has achieved HUD’s highest rating nearly every year since then.

Under Anderson’s leadership, RIHA developed an Asset Management Plan that shifted RIHA’s philosophy toward the development of affordable housing for Rock Island residents of varying incomes as well as its most vulnerable residents. Through implementation of the 2003 Asset Management Plan and the 2008/2009 American Recovery and Reinvestment Act Implementation Plan, the agency has worked to meet the changing needs of the city’s diverse population.

In 2019, Community Home Partners (CHP) was created as the non-profit entity to manage RIHA and its nonprofit corporation Community Housing Services (CHS). Established in 2003, CHS helped the housing authority reduce its dependence on federal subsidies and was instrumental in transitioning most of the agency’s HUD subsidized public housing properties into brand new neighborhoods.

Between 2003 and 2019, the agency demolished 204 units of obsolete public housing, renovated 141 apartments and constructed 232 units of brand new homes, apartments, townhomes and duplexes around the city. Today, CHP has grown to become the largest landlord within Rock Island.

“The role changed as I was here but our mission has always been to serve the housing needs of the community,” Anderson said, adding “The way we operated changed tremendously over the years.”

Prior to the asset management plan, there was “a big disconnect between RIHA and the community,” she said. Today, the organizations enjoy a wealth of partnerships with the City of Rock Island, other community partners and area social service agencies in order to bring a variety of resources to its residents. It currently provides housing for 1,200 families, or an estimated 2,400 residents.

Anderson said it has been a rewarding career, but believes it is time to step back. “We still have more to do but we’ve gotten an awful lot of work done in the past 20 years.”

Throughout her career, she has never lost sight of the tremendous need for affordable housing, and believes the need is even greater today. “Now we’re finding people who have historically not been in need of housing assistance are coming to us for help.”

Active in national housing organizations and education efforts, Anderson is a certified property manager with the Institute of Real Estate and Management. She also is certified by Rutgers University’s Center for Real Estate.

Anderson is a graduate of Central College in Pella, Iowa and a native of Storm Lake, Iowa. She now lives in Davenport with her husband Jim Anderson, CEO of the Schebler Company in Bettendorf. The couple has a son, Matt.

For more information, contact Kathleen Vondran at 563-590-4762 or kathleenv@tagteamagency.com.

Sean Leary
Sean Leary is an author, director, artist, musician, producer and entrepreneur who has been writing professionally since debuting at age 11 in the pages of the Comics Buyers Guide. An honors graduate of the University of Southern California masters program, he has written over 50 books including the best-sellers The Arimathean, Every Number is Lucky to Someone and We Are All Characters.
See More Articles From Sean Leary
Tagged: community home partnerssusan andersonsusan anderson retiring from community home partners